After Pragya confessed her feelings for Abhi during his wedding with Meera, check out the recent ‘wedding twists’ happening in your Zee TV shows.

Weddings have always been interesting and full of dramas – be it in your family or even on your favourite TV shows. After the twisted tale of #AbhiGya’s wedding in Kumkum Bhagya, now the Shaadi season has shifted to two of our other favourite shows – Kundali Bhagya and Teri Meri Ikk Jindri. See how the storylines of these Zee shows are getting interesting with the addition of new weddings to their narratives.

Kumkum Bhagya witnessed one hell of a wedding when Abhi was all set to tie the knot with Meera. While Pragya tried to put up a brave face, she eventually couldn’t see him marrying anyone else. She finally acknowledged her love for him only to realise that it was all a plan, carefully plotted by Abhi. He wanted her to realise her feelings and decided to execute a plan with Meera’s help. If this doesn’t scream ‘shaadi wala drama‘ for y’all then we don’t know what will. 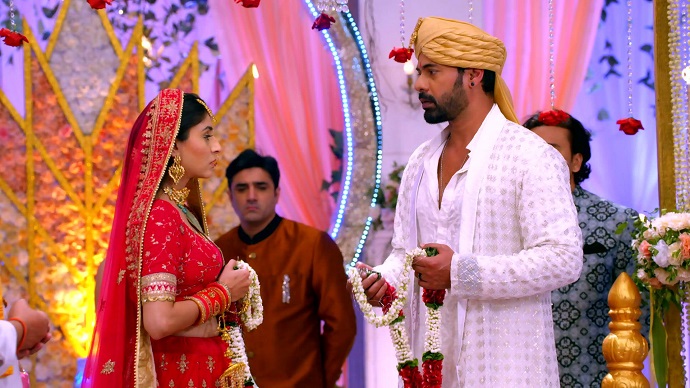 Kundali Bhagya witnessed an epic turn with Prithvi’s re-entry in the show. He arrived in the Luthra house as Kritika’s husband and planned to seek revenge on Karan and Preeta. With Karina, being in his favour, he has carefully started plotting his moves and Sherlyn and Mahira have decided to help him in his play. If the whole Akshay drama in the show wasn’t enough, the makers of Kundali Bhagya decided to cash-in on the wedding shenanigans a bit more by writing Prithvi re-return.

In the recent episode, Sameer and Kritika will find something in Prithvi’s closet. It would be interesting to see if this document will help them expose Prithvi in any way.

In Teri Meri Ikk Jindri, Mahi is getting married to Chief Minister’s son, Arjun. However, Pappu is against her wedding and thinks she shouldn’t get married to anyone who’s richer than him. For this sole reason, he decides to create chaos in her wedding. While his initial plan during the Haldi ceremony doesn’t see any fruition, he then introduces his sister, Chanda in the picture. She is the girl who is having an affair with Mahi’s fiance, Arjun.

Post her entry, Pappu executes the second part of his plan where he tricks Mahi and Jogi and clicks intimate pictures of them. He makes a video by compiling all the pictures. Mahi gets worried as she doesn’t recall how she was taken to Jogi’s place and why she found herself in a compromising position with Jogi. As she comes home with the help of Jogi, Chanda tries to enquire her, however, she lies and later tells Jogi that she is scared.

Later, at the wedding, Pappu sends the same video to someone and believes his trick will finally ruin Mahi’s big day. To know what happens next, watch Teri Meri Ikk Jindri on ZEE5.

To get more updates on Kundali Bhagya and Teri Meri Ikk Jindri, stay tuned with ZEE5.