Radhe Movie Review: This Salman Khan-Randeep Hooda Starrer Has Blockbuster Written All Over It

Radhe: Your Most Wanted Bhai has arrived, and this high octane action entertainer, exceeds all the expectations set by it.

Salman Khan’s movie, Radhe, one of the most awaited films of 2021, has finally arrived, and it definitely exceeds all the expectations that it had set. Starring Salman Khan, Disha Patani, Randeep Hooda, and Jackie Shroff, the film revolves around the story of a vigilante cop, who is tasked with catching a powerful drug lord. Read on to our Radhe movie review and watch it exclusively on ZEEPlex with annual subcription of Rs 499.

The film begins by introducing us to the character of Rana, who is an evil drug lord. After previously operating from Delhi, Rana has now come to Mumbai, to set up his empire there. His ruthlessness is evident right from the first scene. The film then shows us the kind of terror that Rana is spreading in the city – he and his henchmen forcibly sell drugs to students and teenagers and get them addicted to drugs, causing devastating effects on them.

The police force realises it needs a powerful officer who can fight off this criminal who does not fear the law, and hence, they summon Radhe to take up the charge. Radhe is a fierce cop who believes in vigilante justice and often gets into trouble for it. After he is put on the case of ending Rana’s terror, he takes his place as an officer under ACP Avinash, played by Jackie Shroff. ACP Avinash has a comical presence in the film, as he often keeps reminding everyone, including Radhe, that he has the authority.

Later, Radhe meets Diya (Disha Patani) and falls in love with her at first sight. Diya is a model and the sister of ACP Avinash. Radhe, to get closer to Diya, begins lying to her that he too, is a struggling model. What follows is a series of fun and romantic moments between Diya and him.

On the other side, Rana has begun conquering the city by taking over gangs who rule certain areas and making it his own territory for drug peddling. Amidst this, Radhe meets a teenage boy, Azaan, who complains about the drug peddling going on in his school and nearby colleges. Radhe hatches a plan to catch Rana and bring him to justice.

When the movie is halfway, Radhe finally comes face to face with Rana, and both of them realise that they have met their match. In a fight that ensues, Rana manages to escape, leaving Radhe and his fellow cops injured. After these events, Radhe realises he needs a better plan to outsmart Rana.

In the intricate plot, ploys, schemes, and the cat and mouse chase that follows, lies the rest of this highly entertaining and electrifying film. 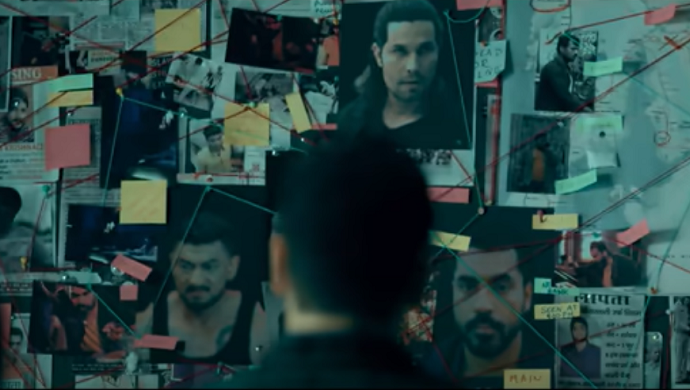 Source: A still from the filmAs always, Salman Khan delivers an impactful performance, nailing all the action scenes as well as the humorous scenes. He has a strong screen presence, which makes him own every scene that he’s a part of. His performance as Radhe is surely one of the most entertaining performances of this year.

Disha Patani has also given a good performance as Diya. In this action and crime centred film, her character comes like a breath of fresh air. Jackie Shroff too, has a great performance in the film, adding to the fun moments of it.

Also read: Salman Khan’s Radhe: Your Most Wanted Bhai Is A Remake Of Which Movie?

Randeep Hooda, as usual, delivers a very powerful performance. In all of his scenes, his character gives us a constant feeling of his cunningness and his viciousness. Also, his dialogue delivery and expressions are excellent and on-point every time.

Besides them, all the other actors in the cast of Radhe, have given great performances. The movie is fast-paced from the very beginning and does not have any unnecessary moments, hence, not letting us get bored. The editing of the film is perfect and Prabhudeva’s direction keeps us glued to our seats. A special note for the fighting sequences in the movie, which are very well choreographed and shot.

The background music of the film is also well-composed. Especially when there are moments of action or fight sequences, the background music adds to the thrill of it and delivers the perfect feel of the film. The cinematography and the visual effects of the Radhe movie are also applaud-worthy. Its music, as we have already discussed, is filled with chartbuster tracks and there’s no sad number in it.

Overall, Radhe is a super-entertaining film that you can watch with your family, this Eid. The film has all the elements in it – action, thrill, romance, comedy, etc that one can ask for.