Neethane Enthan Ponvasantham: 5 Times Surya Dropped Hints About His Love For Anu But They Went Unnoticed

While it is obvious to us that Surya from Neethane Enthan Ponvasantham loves Anu, there were a few times when he dropped several hints but no one else caught on it.

Neethane Enthan Ponvasantham‘s Surya and Anu might share several romantic moments but there are few times when Surya went out of his way for Anu. His thoughtfulness proves to us, how much he loves her. But unfortunately, no one else caught on to these obvious hints that he kept dropping!

1)  When he made Anu the head of Devanandini Sarees

When Subbu asked Anu to resign from her job because she was causing the company a lot of trouble, Surya didn’t take a second to appoint her as the head of Devanandini Sarees, so that she could still work with him. We are sure that Anu deserves it completely, but Surya’s promptness clearly said something about how much he wanted to be around her.

2)  When he stopped her wedding with Sampath

When Surya learned that Anu was unhappy with the marriage alliance, he found a way to break her wedding and it was one of the first times we saw a spark between him and Anu. His contribution to Anu’s happiness is limitless and this was just another proof. 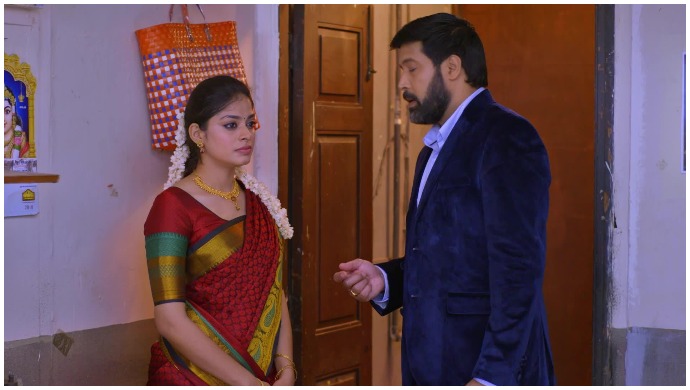 When Anu learned that she was being accused of fraud, she shed tears and lost hope completely till Surya showed up. We wonder how no one asked how Surya showed up so quickly when Anu was in distress. He even took her side, when all the evidence was against her. This should have proven how much he loves her.

4) When he supported Anu during her exams

While it is normal for companies to grant a few days of leaves, it was amazing how much Surya supported her during her exams. She was granted time to prepare for her exams and was also given a few days off post her exams. Surya even dropped her for a few of her exams. While Pankaj knew why he did so, no one else gave it a thought.

5) When Anu’s father asked Surya about Neel and Anu

When Subbu asked for an opinion on Neel because he wanted to get him married to Anu, Surya was very clearly disappointed. He immediately changed his expressions and became sad. He later told Subbu the truth about Neel but there was more to his sadness than just that.