Bob Biswas starring Abhishek Bachchan is all set to premiere on ZEE5 on December 3, 2021. The song from the film Tu Toh Gaya Re will be released today i.e., on November 25

Bob Biswas is the upcoming film starring Abhishek Bachchan in the lead role. The film is all set to release on December 3, 2021, on ZEE5. Abhishek plays the unlikely but deadly contract killer in the film. Apart from Abhishek, the film also stars Chitrangda Singh in lead roles. The film is a crime drama set against the backdrop of a love story and showcases the dual life led by a contract killer, Bob Biswas.

Ahead of the release of the film, the lead actor has shared a piece of good news about the film. The song Tu Toh Gaya Re from Bob Biswas is all set to release today. Abhisekh Bachchan took to his social media account to share the news with his fans. Taking to his Instagram handle the actor shared a poster in which he can be seen standing beside a car with his unique look in the film. Alongside the photo, it was written that Tu Toh Gaya Re will be out today. At the top, the name of the film was also written. 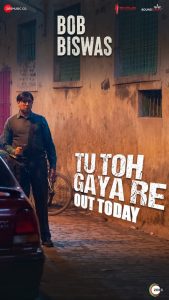 It is to be seen how will be the lyrics of the song and what visuals will be displayed in the song. As per the name of the song, it must be something about Abhisekh’s deadly character. Speaking more of the film, the trailer shows the journey of Bob Biswas, a middle-aged hitman-for-hire who comes out of a lengthy coma not being able to remember any details about his life and his past including his own family. Further in the trailer, as he tries to remember his identity, episodes from his past come alive, putting him in a moral dilemma between the history of his deeds versus his newly developed sense of right and wrong.

Bob Biswas is a spin-off of a popular character from Sujoy Ghosh’s 2012 cult mystery thriller film, Kahaani. It is directed by Diya Annapurna Ghosh and written by Sujoy Ghosh whereas, Bob Biswas is produced by Gauri Khan, Sujoy Ghosh and Gaurav Verma. The film is all set to premiere on ZEE5 on December 3, 2021 and will be available in over 190 countries.