Bang Baang: 5 Whistle-Worthy Dialogues By Meera That Gel Well With Her Feisty Character

Ruhi Singh is winning hearts with her fierce performance in ZEE5’s latest release, Bang Baang. Her hard-hitting statements totally stole the show. Take a look at her classy dialogues here.

The latest ZEE5 Original action thriller series, Bang Baang, starring Faisal Shaikh, Ruhi Singh, Aman Gandotra, and Ayyam Mehta in lead roles is making too much noise on the internet, thanks to the cast’s impeccable acting skills and its intriguing storyline. The show follows the story of a charming criminal Raghu, who is chased by his ex-girlfriend, Meera, who is a police officer. While she has to deal with her love-interest while being engaged to another man, Meera doesn’t let anything come in her way. She proves to be the efficient cop and her sassy dialogues in the show are the perfect comebacks for the sexist-stereotype society that leaves no stone unturned in pointing fingers at women. Here’s a quick peek into Ruhi Singh’s hard-hitting statements.

1. When the goons attack Meera, she relentlessly tells them that she alone is enough to fight them back. Meera has passed through several hurdles to find the truth about Ramola’s murder. Every time she finds a clue, someone from Rohan’s family tries to attack her and put her down.

2. When she bumps into Raghu after years and learns that he is a prime suspect, she tells him that she knows where a man’s weak point is and that she also knows where she has to hit and kill the people who have done wrong in the case. Meera surely isn’t scared of holding the gun.

3. Meera has been through every fight and has also put herself in the ring to fight with the enemies. She gets into the ring to fight against Raghu and also manipulates him by asking him to show his punches before the punchlines. The duo indulges in a quick wrestle and then proceeds towards the second step in their case.

4. Meera tells Raghu and his gang that she is no less than anyone when it comes to her strength and intellect. She requests him to spill the beans about Ramola’s murder, but in vain. She further tells him that she will stand strong in his support if he’s willing to fight the case with honesty.

5.When her co-officer doubts her whereabouts, she tells him that Raghu wasn’t the only one who was attacked. She takes her stand and informs him that she was also in a problem and that her life could also be at risk. She urges her co-officer to not make any conclusions before understanding the depth of the situation. 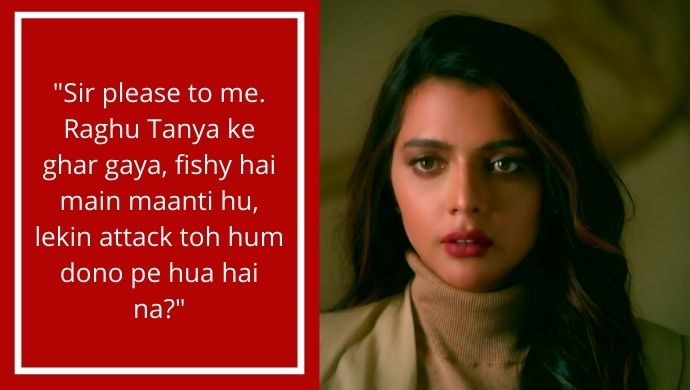 Bang Baang released on ZEE5 on January 25 and has been receiving rave reviews from the audience. Ruhi mentioned that she has always been a die-hard fan of old fashioned sci-fi movies and crime thrillers. “Catching monsters, getting abducted by aliens, murder mysteries with a supernatural twist are my jam,” she wrote. She remarked that she loved playing Meera in Bang Baang as she got to unleash her inner superhero and got to kick some bad guys! Catch a glimpse of Ruhi in Bang Baang only on ZEE5.

Also Read: Bang Baang: If Not Raghu, Here’s Who We Think Can Be The Masked Culprit