100 Years of Satyajit Ray: Looking back at Sa Re Ga Ma Pa – 2020 Bangla’s musical tribute to the legend!

Let’s look back at the heartwarming musical tribute that the team of Zee Bangla Sa Re Ga Ma Pa paid to late filmmaker Satyajit Ray, with May 2, 2021, marking his 100th birth anniversary.

On May 2, 2021, we celebrate the late legend Satyajit Ray’s 100th birth anniversary. Ray was a legendary filmmaker, author, music composer, lyricist, illustrator, and much more, and his inherent brilliance consistently showed in his art. Last year, on the occasion of  Sa Re Ga Ma Pa- 2020 Bangla’s 25th anniversary, the team paid the legendary filmmaker Satyajit Ray a beautiful musical tribute!

A tribute by the Sa Re Ga Ma Pa team

The team of Sa Re Ga Ma Pa 2020- Bangla made an extremely sweet grand gesture during its 25th anniversary celebrations last year. Various eminent, established musicians along with recent participants of the show, came together to give its audience a super-nostalgic musical performance. While the singers hit the tunes of Ray’s music with their voices, instrumentalists hit the beats and other tunes with their respective musical instruments. 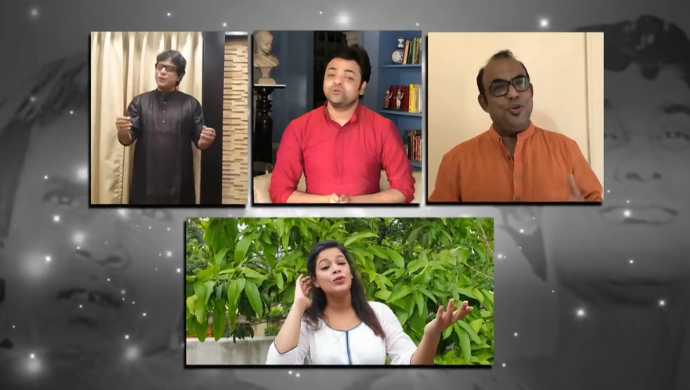 Also read: Apu and Krishna’s transformations from young adults to newlyweds are too sudden but we love them!

Popular Bengali singers namely Raghob Chattopadhyay, Rupankar Bagchi, Iman Chakraborty, Soumyojit, and others sang some of the most famous songs of Satyajit Ray’s films. On the other hand, remarkable instrumentalists such as Sourendra, Tanmoy Bose, Purbayan Chatterjee, and others played various instruments and stunned us with their music.

O re Halla Rajar Sena, Bhuter Raja Dilo Bor and Dekho Re Nayan Mele from Goopy Gyne Bagha Byne, and Aha Ki Ananda Akashe Batashe from Heerak Rajar Deshe accounted for the few marvellous Ray film songs that the Sa Re Ga Ma Pa musicians performed while paying a loving and respectful tribute to the legendary man who we all miss!

Also read: Here’s how Udoy and Rimli’s wedding was just as unexpected and as similar as to Apu and Dipu’s

Songs from Satyajit Ray’s films like Goopy Gyne Bagha Byne and Heerak Rajar Deshe, hold an enormous space in the hearts of every Bengali person. The filmmaker made brilliant, gripping films with the most incredible music and background, that have remained stuck in people’s minds, making it a super nostalgic experience any time we listen to them.

Satyajit Ray also gave us many other captivating films such as Charulata, Sonar Kella, Nayak, Joi Baba Felunath, Mahapurush, and more, which all hail from various distinct genres. The only common element in each of his films is probably Ray’s unparalleled cinematic knowledge and inputs. A true marvel of a man with talents beyond imagination, Ray’s contribution to Indian cinema will remain unmatched.

Watch popular Satyajit Ray films like Mahanagar only on ZEE5!