Well, here is a question for all of you if Akshay Kumar can do a Laxmii in a sari, Raveena Tandon can do an Akshay Kumar in a sari? In fact that is exactly what Raveena Tandon did when she appeared as a special guest on dance reality show Super Dance 3 with Shilpa Shetty. The two girls dressed in all their fineries danced on Chura Ke Dil Mera and Sheher Ki Ladki and left everyone wanting more.

The superhit song which was originally featured in the film Main Khiladi Tu Anari, which released in 1994 was one of the first foot-tapping numbers that took Shilpa Shetty to the very top. The song, which is a part of a dream sequence, is featured on Shetty and Akshay Kumar. Raveena Tandon decided that while Shilpa will be busy playing herself on stage, she would the latter who is best known for his jumps and dips while dancing. 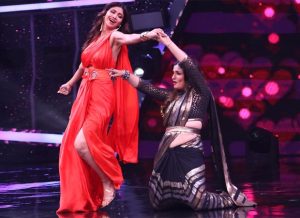 When Raveena Tandon in a shimmering sari did a jump straight to her knees just the way Kumar did it in the film, she left everyone stumped.

The National Award winning actress is a mother of two and an extremely active social media personality. Though Shilpa Shetty is the Yoga Goddess, Raveena Tandon is that football momma who ensures she is in every race and winning it too.

She clearly did win all the hearts for her appearance on the show. Geeta Kapoor who judges the show alongside Shilpa Shetty leapt out of her chair seeing Tandon’s antics. The chemistry between the two actresses and their fun and crazy antics makes a must watch for all 90s fans. The girls really were memorable in their madness. And why shouldn’t they, after all, as someone once said, ‘why should boys have all the fun?’