Here’s a list of celebs who fought in public with each other and showed everyone that they are ordinary people with emotions and anger too. One of them are Bollywood celebrities like Salman Khan and Shah Rukh Khan, who have fought in public too

Celebrities have very glamorous lives and have many friends and loved ones around them at all times. While we may think all the actors are great friends, that’s not true. Like the aam junta they too have their share of fights and enemies. We have seen Bollywood friendships, and here’s a list of Bollywood amenities– 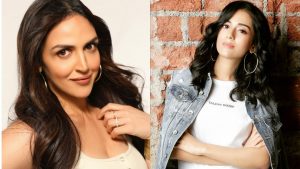 When Esha Deol and Amrita Rao were working together on the sets of Pyaare Mohan, they had a huge fight. Amrita Rao said something about Esha that rubbed her the wrong way. Esha reportedly slapped Amrita and said she didn’t regret slapping Amrita as she stood up for herself.

Salman khan allegedly once slapped director Subhash Ghai. He even admitted to the same a year later. To help solve the issue, Salman Khan’s father, Salim Khan, called Subhash Ghai and apologized for his son’s behavior. He sent Salman Khan to meet Subash Ghai and ask for forgiveness.

Shah Rukh Khan and Salman Khan were the most significant controversies that made headlines for all the wrong reasons. They got in a physical spat while at Katrina Kaif’s birthday party; they both argued and fought with each other. They hurt each other in the process. Years later, as we know, they have put it behind them and are now starring in each other’s films.

There were reports of them having a tiff because they dated the same girl, Katrina Kaif. But honestly, it all started when Ranbir had not even begun acting. Once, at a bar, where even Sanjay Dutt was present, Salman had slapped Ranbir because of an argument that no one knew.

These are pretty rough patches, and we hope the actors put it behind them and become friends again.