On the occasion of Ranbir Kapoor’s birthday, his sisters Kareena Kapoor-Karisma Kapoor send warm wishes for RK on his 39th birthday. While Bebo shared an old photo of him with Taimur, Karisma sent him a ‘tightest hug’

Bollywood’s chocolate boy Ranbir Kapoor turns a year older today. The actor, who’s currently in Jodhpur with his ladylove Alia Bhatt, has reportedly rang in his birthday in the city. Two days back, the couple was spotted outside the airport soon after they had landed in Jodhpur. Well, since morning wishes have been pouring in for the actor. Late last night, his sister Riddhima Kapoor had wished the Rockstar actor while sharing a family photo featuring Alia Bhatt. Mother Neetu Kapoor also wished her son and penned a heart-warming wish.

Well, apart from others, Ranbir Kapoor’s sisters Kareena Kapoor Khan and Karisma Kapoor also took to their social media handles and shared throwback photos. Taking to her Insta story, Bebo shared RK’s old photo with Taimur and called him legend. In the snap, the actor is seen looking away from the camera, while holding baby Tim. Karisma Kapoor, on the other hand, shared a throwback photo and wrote, “Happy birthday, Ranbir. Tightest hug back.” In the photo, the brother-sister duo is seen looking into the camera, while RK hugs Karisma. 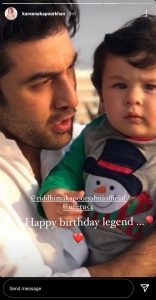 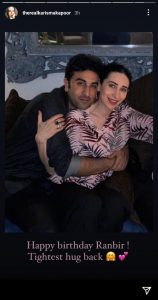 On the work front, Ranbir Kapoor’s much-delayed film Brahmastra is yet to see the light of the day. The final and new release date of Brahmastra that also stars Alia Bhatt, Amitabh Bachchan, Nagarjuna, Mouni Roy and others, is yet to be announced. That apart, RK will also be seen in YRF’s Shamshera opposite Vaani Kapoor and Sanjay Dutt. The film is slated to release on March 18, next year. Ranbir Kapoor will also be seen in Sandeep Reddy Vanga’s directorial Animal.