Recently on Unboxed with ZEE5, Paurashpur star Poulomi Das revealed a side of hers that you probably don’t know.

Recently on Unboxed with ZEE5, Paurashpur star Poulomi Das revealed a side of hers that was never seen before. She candidly spoke about fairness creams, how she deals with social media pressure, and more. She also spilled the beans on some lesser-known facts about her life and that has only made us love her more. Take a look at what Poulomi Das had to say on some of the questions asked on Unboxed with ZEE5.

Take a look at 60 Seconds With Poulomi Das on ZEE5 Unboxed here:

Poulomi Das on Unboxed with Zee5

Are you a morning person or a night person?

Poulomi revealed that she is a morning person as she has to go to work in the morning and ‘many other things’ also happen in the morning for her. She also mentioned that she would rather go to bed early than stay up late at night as she is a very ‘lazy’ person.

1. What is the story behind your middle name ‘Polo’?

Poulomi said that when she started working in Kolkata, there were many people with the same name and surname so she came up with a shorter version of her name and started adding ‘Polo’ so as to help others differentiate between other Poulomi Das and herself.

Paurashpur actress mentioned that when she is going out on dates she prefers her beverage to be coffee and when she is working, she would rather have Adrak Chai. She also mentioned that she likes to have black coffee when she needs to stay awake.

“I bought a samosa today, I was really craving for a samosa” she said. She revealed that she was on a strict diet for the past 15 days and decided to treat herself to the food she loves after completing her diet.

5. On a date, would you go for beer and chakna or coffee?

Poulomi said that she would not opt for a beer on her first date as she would not want to show the person her ‘crazy side’ on the very first date. She would rather be sober. 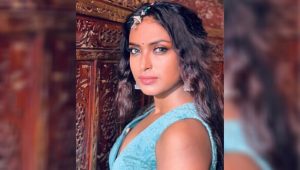 7. One thing you will never leave your home without?

She mentioned that she mandatorily carries a mask and jokingly said that without a mask in Mumbai, a 200 Rs. fine has to be paid so she never leaves without her mask. She also carries her phone and wallet without fail.

8. One thing that you get angry about?

She jokingly said that she has a ‘list of things’ that make her angry but later mentioned that she gets very annoyed when work-related things are not properly scheduled as she likes to have everything planned.

9. One bad habit no one knows about?

She revealed that she loses her appetite when she is under a lot of stress and tends to purge out whatever she has eaten under stress. She has been dealing with this ever since she was a kid.

She bought a very expensive bag and lied to her mother about the price of the bag. She told her that it cost only about Rs. 2000 even though it was a lot more expensive than that.

“I love biriyani, pizza, samosa, and cold drinks”, she said. She also mentioned that her go-to drinks are gin and tonic or wine.

12. What is your idea of a perfect date?

She said that she is an ‘old soul’ and would want to go to a place where she can have a nice conversation with her date. She mentioned that she likes dining dates where it is not too loud and she can talk to her date and get to know him better.

13.What is the best comment you have received on social media?

She shared that a user commented asking if her name ‘kala’ on Paurashpur is a bit racist to which she said it is ‘kala’ and not ‘kaala’ (black), so it is not racist.

14. What is the worst comment you have received on social media?

She believes that social media is like a vulture and mentioned that she has a motto to delete negative comments on social media. “If in any picture I look slightly fairer than what I really am, a lot of people comment saying I don’t like my skin,” she said and added that it is important to take such comments ‘very lightly’ for the sake of mental health.

15. What is your take on fairness creams?

16. What is your favourite holiday destination?

She shared that she loves Santorini and in winters, she would want to visit Finland to watch the northern lights.

17. What would you never do in a relationship?

18. Which is your favorite quote?

“Work hard until your idol becomes your rival”, she said

20. Celeb you want to get stuck on an island with?

She mentioned that she would like getting stuck with Chris Evans on an island for more than a year.

She mentioned that she last searched about the Sydney virus and got scared that we might witness another outbreak.

23. Describe yourself in three words

She said that 2020 was all about survival and she learned that we should never take disadvantage of any situation.

kissing a boy, she said.

“Swimming trunks, maybe nothing but he is married”

30. One Paurashpur co-star, you wish to work with again?

32. Have you ever dated older men?

“I have always dated an older man, I don’t date kids. I need a mature man in my life”, she said.

33. What would you change about your character?

“Nothing, my character is perfect”