Late Rishi Kapoor’s Birthday Celebration Was Everything About Him; Neetu Kapoor Shares Glimpses Of The Unique Cake The Caught Our Attention

The unique birthday cake had everything that Rishi Kapoor always loved. Neetu Kapoor shares a few snaps from the bash consisting of unique cake

Last year on April 30 one of the Bollywood stars, Rishi Kapoor died after battling cancer for 2 years. His family and fans miss him and on his birthday they all remembered him. Rishi Kapoor’s wife Neetu Kapoor celebrated the birthday of her late husband uniquely on this Saturday. It was his 69th birth anniversary this year and Neetu Kapoor left no stones unturned in celebrating the day. The next day of his birthday was on Sunday, Neetu Kapoor shared some mesmerising pictures from the celebration.

Neetu Kapoor took to her Instagram stories to drop the picture of a cake, and we must say it has all our eyes. The cake had everything that Rishi Kapoor was fond of right. From a whisky bottle and mutton curry bowl to a Twitter logo and a guitar and a cassette of songs from his old hits on it. The cake was exactly what Rishi Kapoor would have loved. 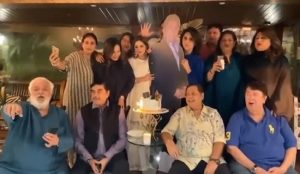 Neetu Kapoor on the occasion of Rishi Kapoor’s birthday hosted a get-together which was also attended by Kapoor’s brother Randhir Kapoor and friends Shatrughan Sinha and David Dhawan, among others. Neetu Kapoor shared glimpses of the celebrations on her Instagram stories. Their get-together looked as if it was the moment from the film Kapoor And Sons. Neetu Kapoor posed with a life-size cutout of Rishi Kapoor for the group photo. 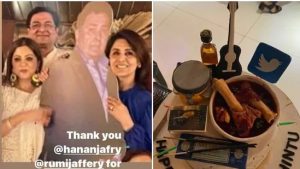 On the Saturday morning that is on Rishi Kapoor’s birth anniversary, Neetu Kapoor penned a heartwarming note along with a picture on Instagram. The note reads as, “I learnt a lot from Rishi ji during our last few traumatic years in NYC .. how we celebrated when his blood counts were high .. we dined shopped laughed .. in his lows we just stayed home watched tv ordered in amazing food n still had some wonderful moments in hope that the next round of chemotherapy he would be better .. hope n being strong is what he taught me .. value each day .. we all miss him today !!! I can picture him how excited he would have been for his 69th birthday !! I’m sure he is celebrating with his family up there Happy birthday Kapoor Saab.”