Kumkum Bhagya: Here’s How History Is Repeating Itself – Prachi Is Going Through Same Things Like Pragya

With Rhea behaving how Tanu used to, history is repeating itself with Prachi suffering in love with Ranbir just like Pragya did with Abhi.

Kumkum Bhagya stars Sriti Jha as Pragya and Shabir Ahluwalia as Abhi in lead roles. While Pragya and Abhi have constantly proven to be each other’s soulmates, they have always had Tanu causing disruption in their relationship. And surprisingly enough, Rhea (Pooja Banerjee) seems to be following in her footsteps, by doing the same to Ranbir (Krishna Kaul) and Prachi (Mugdha Chaphekar).

Watch what will happen next on Kumkum Bhagya here:

Is history truly repeating itself?

Tanu has always had her eyes on Abhi. She wished to marry him too, but Abhi fell for Pragya instead. Abhi had made a promise to Tanu’s mother of taking care of her and could not break it. And using this to her advantage, Tanu almost got him to marry her instead of Pragya. She repeatedly used her manipulative tactics and Rhea seems to be doing the same now!

Also read: Sriti Jha Celebrated Her Birthday With Co-Stars On The Sets Of Kumkum Bhagya, Watch Pics And Videos

As destiny would have it, Abhi and Pragya still got married. But Tanu mercilessly conspired to separate them. Something very similar is now happening with Rhea being the evil one trying to replace Prachi in Ranbir’s life with her horrid mind games and ruthlessness. While Pragya had to endure the deepest of sorrows, pain and hurt due to Tanu, history is repeating itself as Prachi is now being subjected to the same by her own sister, Rhea.

Not only that, with the help of a very close friend, Rhea morphed Prachi’s photos and wrongfully made them go viral in the entire college. Her intention behind it was to get Prachi humiliated enough for Ranbir to no longer want to be with her. Further, Rhea emotionally blackmailed Prachi to hurt Ranbir and permanently break things off with him so Rhea could stand a stronger chance at winning him over soon. 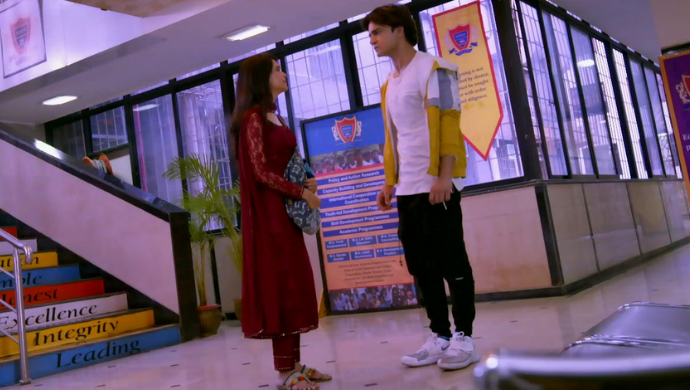 Back when Pragya was pregnant Tanu attempted to get her killed in order to get rid of her so she could be Abhi’s partner. Rhea is being no less when it comes to her desires of getting married to Ranbir. She is attempting every possible thing that could potentially ensure Ranbir ends up being her partner instead of Prachi’s. In a recent episode, Rhea even tried to get engaged to Ranbir to seal the deal. Unfortunately, she did not succeed at it since Abhi interrupted the ceremony. It is simply sad and shocking how Prachi is enduring the pain that once Pragya had to while Rhea is shameless following in Tanu’s footsteps.