Kichcha Sudeep To Appu Sir: Here’s Everyone Who Was Present At Pailwaan’s AUDIO LAUNCH

Look What We Have Here! 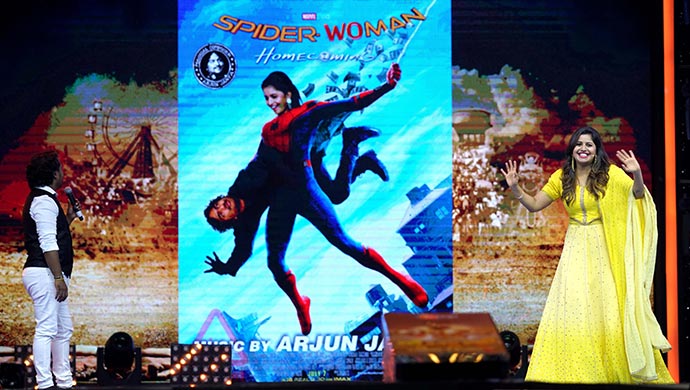 The next two-three pictures will change your life! So someone during the audio-launch presented the audience with movie posters of Arjun Janya and host Anushree. Here’s a spin-off of the Spider-Woman poster and according to me, it’s right on!

Did Someone Say Titanic? No Problem! 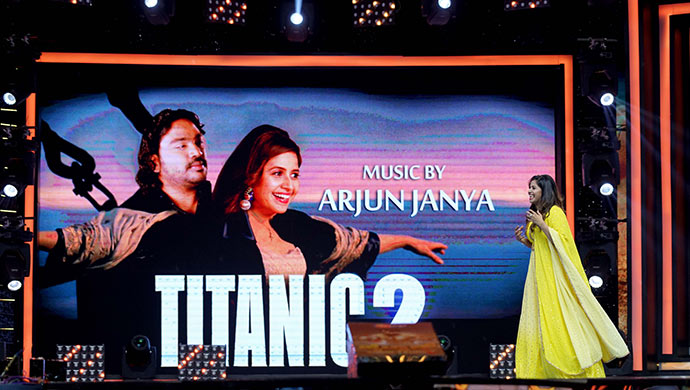 Anushree is blushing both on the slide show and on the stage. The music by Arjun Janya text on the poster is absolutely fantastic on the creative designer’s end. Any just wants to run away from the stage it seems like. 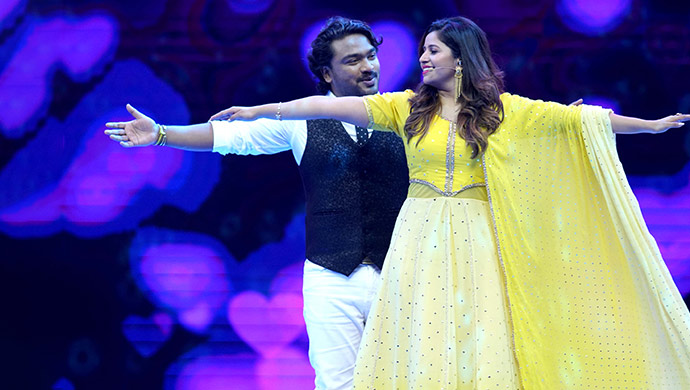 What can be regarded as the best recreation of the Titanic scene in the entire Sandalwood, Anushree and Arjun have done a superb job in this pose. The romance, the colours, everything compliments each other perfectly. 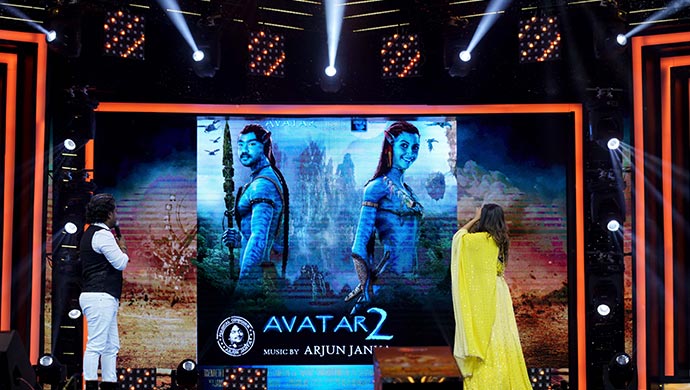 Look! It’s Anushree and Arjun in an Avatar 2 poster. And once again music is given by the talented Arjun Janya. Is Anushree hiding her face? What do you think? 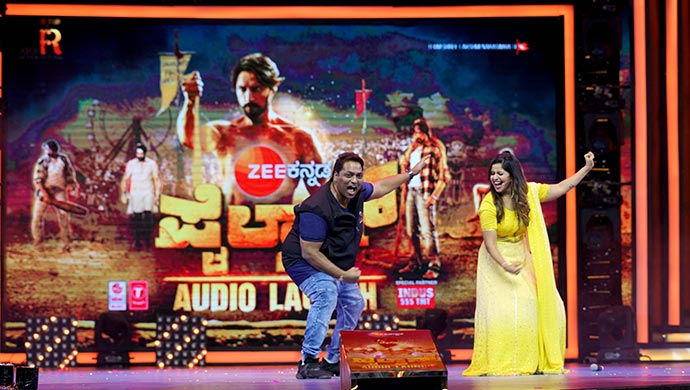 Anushree is enjoying dancing with the legendary Bollywood choreographer Ganesh Acharya. Maybe he is teaching her another classic Pailwaan step?

The Beautiful Hostess Anushree Welcomes Everyone With A Sakkath Whistle 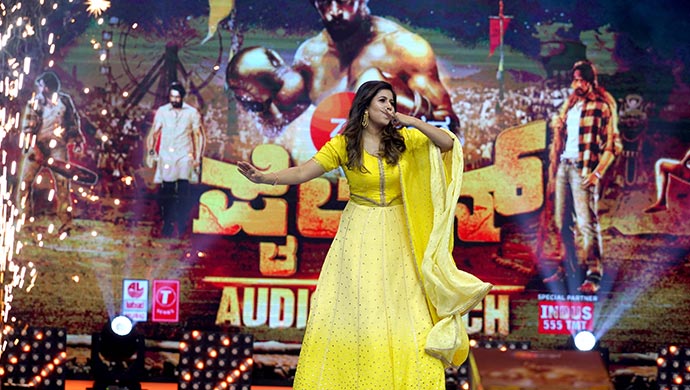 As you all know, Kichcha Sudeep’s latest upcoming release Pailwaan, which was scheduled to launch on 9th August this year, was postponed because of the flood-raided North Karnataka. In a small clip, the Badshaah of Sandalwood apologised to fans and made them aware of the many places that have been destroyed in the state due to monstrous floods this year. For the same, Pailwaan, slated to release in five languages in the entire country (Kannada, Tamil, Telugu, Malayalam and Hindi), will now be premiering in theatres on 12 September 2019, according to sources. Speaking about the cast, we have big names like Suniel Shetty, Kabir Duhan Singh, Sushant Singh, Sharath Lohitashwa and many more in the mix. Of course, the lead roles will be played by the Badshaah Kichcha Sudeep and Tele-actress Aakansha Singh.

Today we would like to share some interesting and EXCLUSIVE pics from the Audio Launch of the film on Zee Kannada. Don’t forget to scroll till the end because there are little surprises along the way. Starting with the adorable, anchor Anushree, who is the best in business. Her whistle is enough to get the crowds motivated to get started. 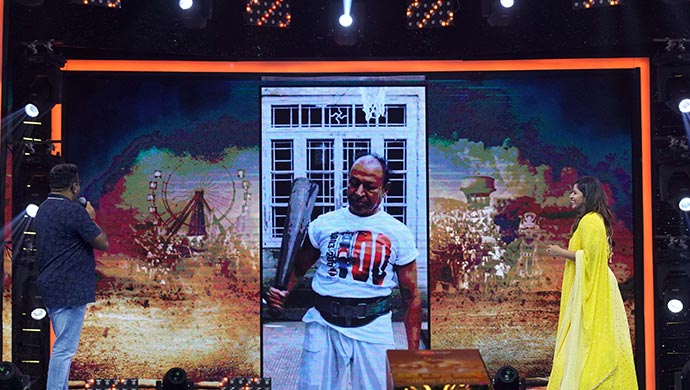 Looking just like a Pailwaan is Namma Annavare Dr Rajkumar, holding a piece of equipment used during wrestling. That’s the best part of such EXCLUSIVE stories; you get to see awesome pictures like this.

Suniel Shetty Regretted His Absence And Sent A Short Clip 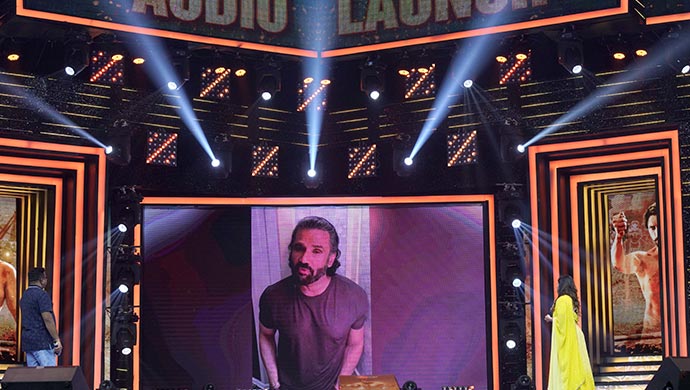 The one and only Anna of Bollywood was presumably absent during the launch for reasons unknown and for the same sent a short clip for all fans. But you must admit that Suniel Shetty looks classy whether in short or long hair, isn’t it? 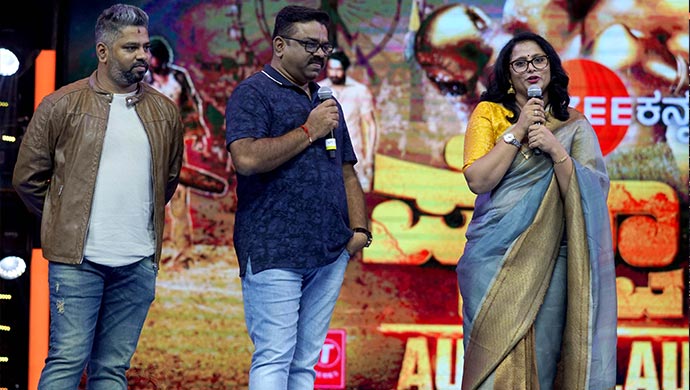 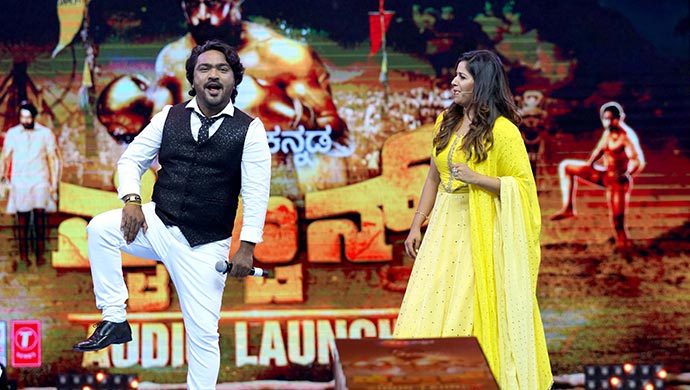 Music Director of the film Arjun Janya, who is also the judge of Dance Karnataka Dance Family War 2, came on the stage and performed like a hero. Soon, his on-screen lady-love Anushree made him try the ‘classic Pailwaan step’ and voila! You can see the exceptional results. 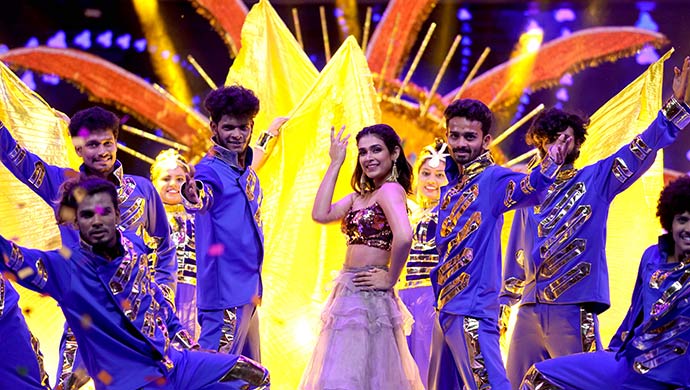 Known for her work in the Hindi TV shows – Na Bole Tum Na Maine Kuch Kaha and Gulmohar Grand, actress Aakansha Singh is all ready to be launching herself in Sandalwood with Pailwaan. For the same, she was present at the Audio launch and gave a fantastic performance to the audience. 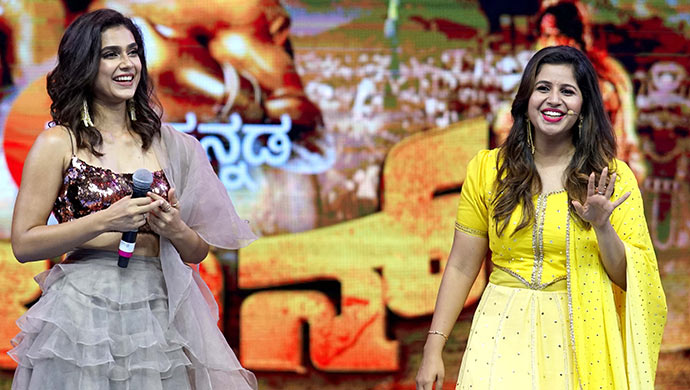 Looking at both these ladies if your smile widens then two brownie points for you. All I can see in this picture is beautiful, charming, pretty and smiles!

As Pretty As A Daisy 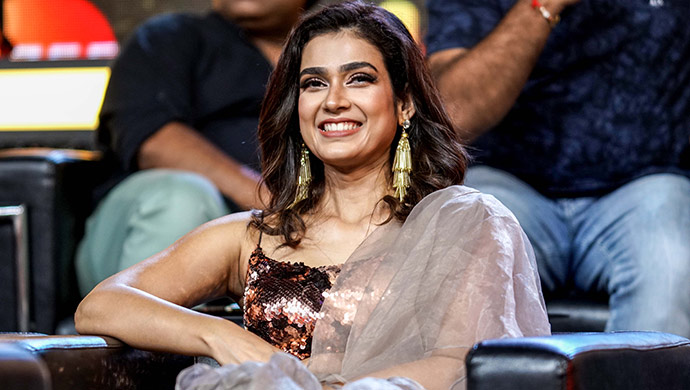 Apart from her stint on TV, this gorgeous lass has done a supporting role in the Bollywood film Badrinath Ki Dulhania and two Tollywood films too. Let’s hope she entertains us with more feature films like Pailwaan.

Rama From Jodi Hakki Is Here To Welcome Kichcha Sudeep 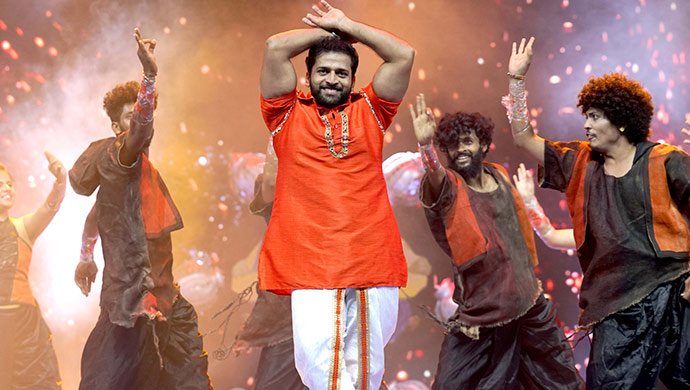 Namma Zee Kannada’s Pailwaanre comes to welcome Sandalwood’s Pailwaan. Isn’t that cool? Thandav Ram from the show Jodi Hakki gave a special performance in order to welcome the Badshaah of Sandalwood on stage.

There’s The Moment You Have Been Waiting For 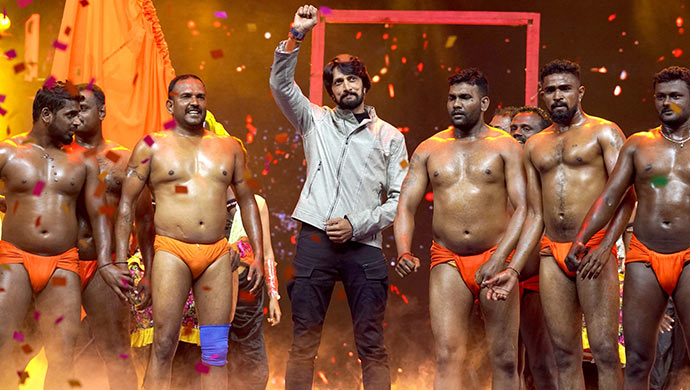 Kichcha Sudeep finally arrives for launch in a Pailwaan style. Look at all his fans standing beside him. Kichcha, however, humbly acknowledges them and the audience too.

Arjun From Naagini Is Here To Welcome Whom? 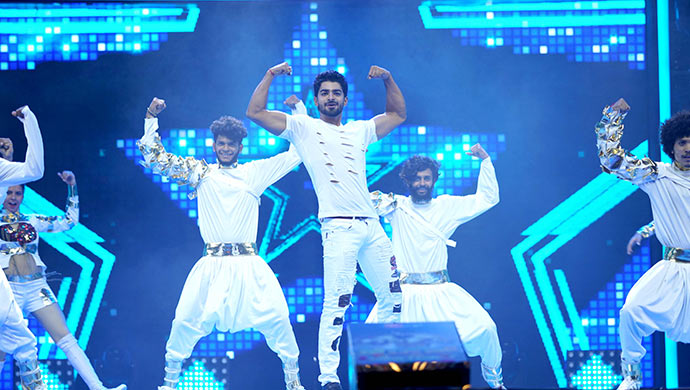 Dheekshith Shetty aka Arjun from the prominent show Naagini was present too. Can you take a wild guess, who was he there to welcome? Don’t worry we won’t leave you in the dark, keep scrolling…

He Was Present To Welcome Namma Power Star 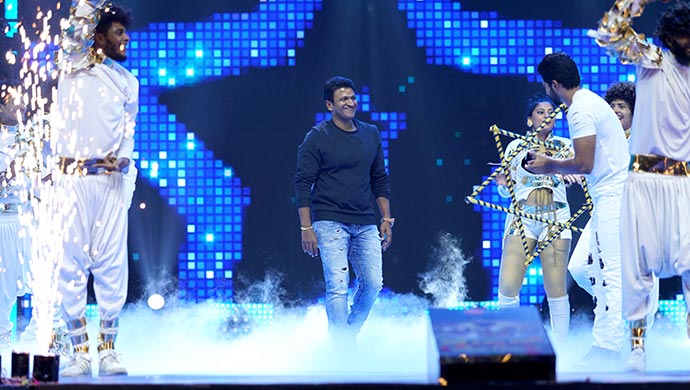 Look at Arjun humbly standing in the side to welcome one of his favourite Sandalwood Power Star, Puneeth Rajkumar. How could Appu Sir not be present for Kichcha’s audio launch?

Their Bond Is Ever-Lasting 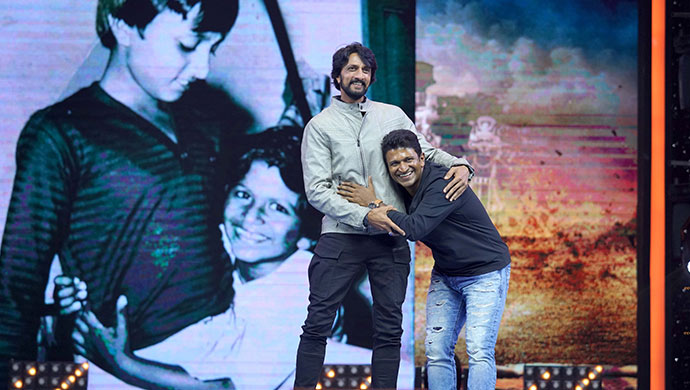 As the Power Star tries to recreate a childhood image with Kichcha, just look at the gala time they are having. Of course, Sudeep is older to Appu age-wise but the brotherly-bond they have formed can never be broken! #Touchwood

Kichcha And The Power Star Shake A Leg With Ganesh Acharya 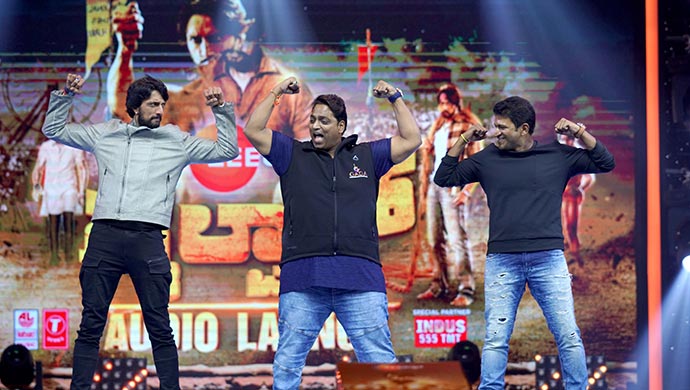 Some dancing from your favourite stars is always required in such events, right? So the choreographer Ganesh Acharya along with Sudeep and Puneeth get together on stage to give fans a good time. 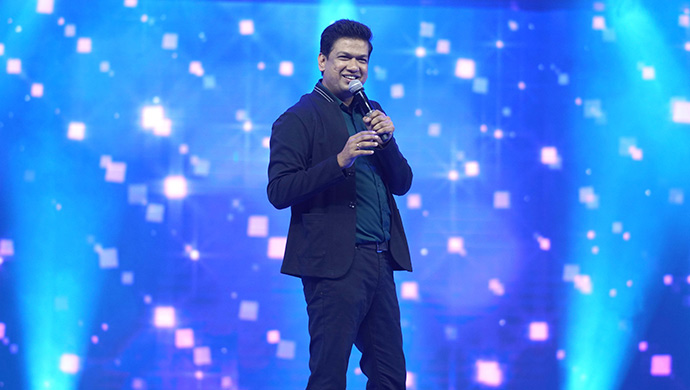 Sa Re Ga Ma Pa Li’l Champs Season 16 judge Vijay Prakash was also present to cheer for his friend Kichcha Sudeep during the audio launch. Apart from the reality show, VP Sir is known for his legendary songs from Sandalwood and is revered in the industry. For Pailwaan, Vijay Prakash has sung the songs, Baaro Pailwaan and Dorassani.

Sudeep And His Wife Look Adorable Together 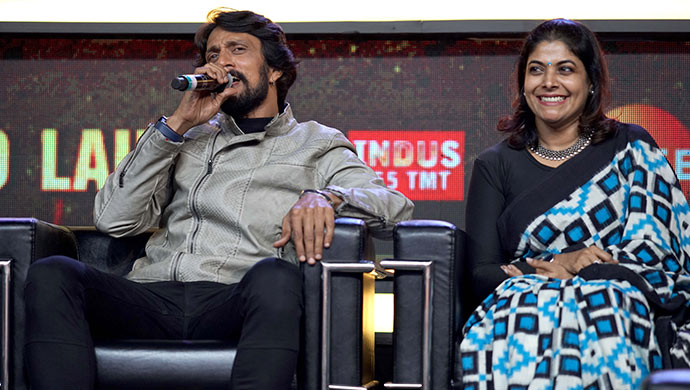 Priya Radhakrishnan, Sudeep’s wife seems to be smiling at her husband’s attempt to sing a song like Vijay Prakash. It also looks like she might be blushing at her husband a little bit, isn’t it?

Sanjith Hegde Is One Of The Singers For Pailwaan 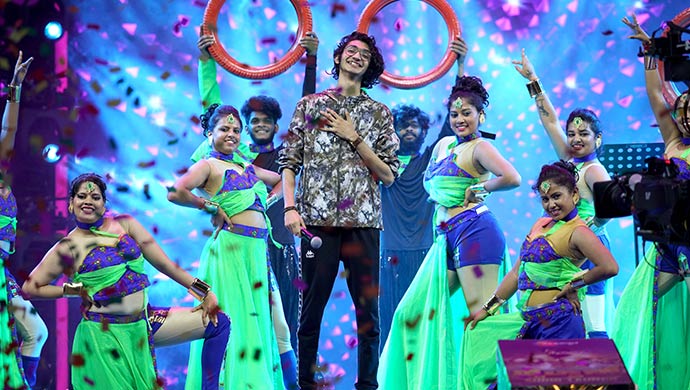 Did you know that this talented young man will be singing the song Kanmaniye in all the five languages that the movie will release in? A participant of Sa Re Ga Ma Pa Season 13, the 20-year-old has already got a stronghold in the industry. #respect

A Group Still With The Giant Pailwaan CD 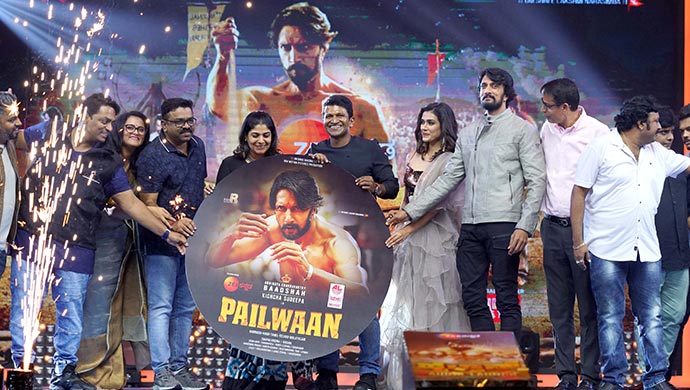 Holding a bigger version of the Pailwaan CD, the entire cast and crew of Pailwaan including Kichcha Sudeep and Aakansha Singh stand for a pose.

Send in your best wishes to the team of Pailwaan, in the space given below.