Kiara Advani Has A Perfect Doppelganger In Town; THIS PIC Of Tanisha Santoshi Will Give You Actress’s Humshakal Vibes – SEE PIC

Recently Tanisha Santoshi, daughter of a renowned filmmaker dropped a picture of hers which has an uncanny resemblance to Kiara Advani and is making the social media ago crazy over the fact

We’ve seen a lot of celebs having their doppelgangers, and it’s something that everyone notices right away. Having a look that is similar to that of a renowned person is something that is addressed. Tanisha Santoshi, the daughter of movie director Rajkumar Santoshi, recently made news for similar reasons.

Tanisha Santoshi recently decided to activate and open her previously secret Instagram account to followers and made a message on ‘fresh beginnings.’ “Let’s meet once more, for the very first time,” she said, hinting at a disclosure regarding her Bollywood breakthrough.

Tanisha published a black-and-white close-up photo of herself donning a salwar kameez and her tresses braided. A bindi complemented her ensemble. Fans remarked on her unnerving resemblance to Kiara Advani in her shot, particularly in her outfit from her recent digital film opposite Sidharth Malhotra. 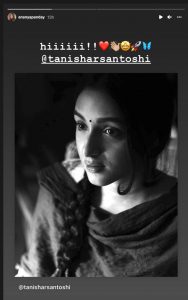 In the comment thread, fans almost went insane, asking questions like, “Is this you, Kiara?” Many of them compared Tanisha to the Good Newwz actress, claiming that there is no discernible difference in their appearances. Tanisha’s close friend Janhvi Kapoor congratulated her on Instagram Stories, writing, “My best friend, my dearest person, and the craziest girl I know is now on Instagram, embarking on a very fresh and wonderful journey.” Please shower her with affection, virtual kisses, and well wishes. There’s a lot of great stuff coming soon.” 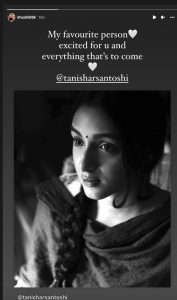 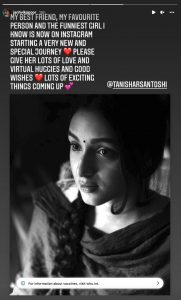 On Tanisha’s post, Janhvi’s sibling Khushi Kapoor responded with an ‘OMG.’ Aaliyah Kashyap and Jibraan Khan also sent their warm wishes. Shanaya Kapoor posted on her Instagram stories, “Absolutely can not wait to see you shine.” In a congratulatory letter to Tanisha, filmmaker Sharan Sharma announced her Debut appearance, writing, “Can’t wait for the starring role, looking forward.” Ananya Panday also took to her Insta stories and shared the same picture and mentioned ‘Hiii’ as the caption.

Kiara Advani received critical acclaim for her role as the love interest of an army officer played by Sidharth Malhotra in her most recent digital film. In addition, the two are rumoured to be dating in real life.