Karbhari Laybhari’s Kanchan trumps all the other villains of Marathi TV. Let us take a look at her most ruthless moments on the show, read!

Karbhari Laybhari’s Kanchan Suryawanshi is one of the most devious vamps of Marathi TV. Without a shadow of doubt, she trumps all the other villains. She is so evil that even her own family fears her to death. We must say, Pooja Pawar deserves a hat-tip for her brilliant portrayal of a negative character, she has totally aced it and how. On that note, let us take a look at the top 5 ruthless moments of Kanchan in the political drama.

As soon as Kanchan heard the news of Rajvir’s father’s passing away, she did not even wait a day to assume control over his house. She wickedly usurped Rajvir’s father’s position and wealth, leaving nothing for his widow and child. She became the head of the house and started treating others unfairly.

It so happened that Sunanda was really hungry once. But, she was waiting for her son Rajvir to return as she did not want to eat without him. When Rajvir returned, Kanchan asked them to sit on the floor and eat leftover food from the day before. Despite knowing that it’s stale, she let them have it anyway. 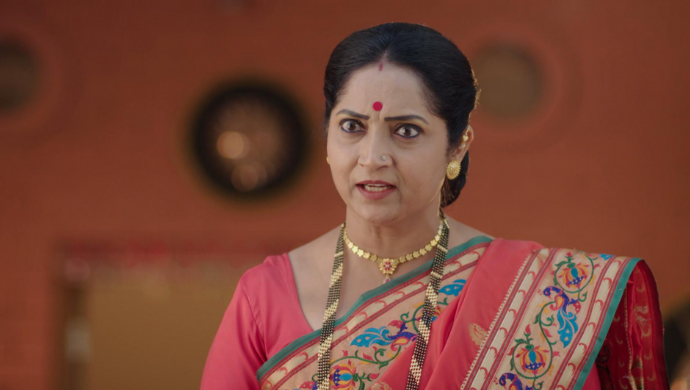 3. Kicking Rajvir out of the house

Kanchan has always hated Rajvir ever since he was a child. She has made him wipe the floor, car’s windows and what not. Her hatred for him increased as he grew up and Rajvir never understood why. One day, she kicked him out of the house for a very small reason and it was truly one of her most heartless moments.

She played Rajvir and Priyanka for pawns just to exact revenge from her rival and Priyanka’s father, Ankushrao. She got them married and promised them a welcoming home and they believed her. Soon after their marriage, she revealed to Ankushrao that it was all a ruse and her true intentions are to make his daughter’s life a living hell. She literally played with two lives just to seek vengeance from her rival.

As if all this was not enough, she started treating Priyanka inhumanly after marriage. From putting her marriage on the rocks to tampering with her reputation, she has done it all to make Priyanka’s life miserable. She did not even let the poor woman enter the main house after marriage and did not provide her with clothes or jewellery as a new bride gets. She asked her to sleep in a small room and deliberately asked her to cook knowing she’ll get blisters. How cruel is that?

We don’t know why Kanchan hates her family so much and cannot wait to find out what prompted her to become this way.