Hamariwali Good News And Apna Time Bhi Aayega Hit A Century! Check Out How These Teams Celebrated Their 100-Episodes Run

Zee TV’s newest shows, Apna Time Bhi Aayega and Hamariwali Good News have been capturing audiences hearts since the beginning and recently, both the shows marked their 100th episodes! Apna Time Bhi Aayega’s cast celebrated their 100th episode with Valentine’s day celebrations and had a blast! The lead pair, Rani and Veer, played by Megha Ray and Fahmaan Khan took to Instagram live to celebrate this moment with their fans!

The actors thanked fans and even cut a cake for the occasion during their live segment. They also took time to introduce some members from the production team and seemed to be having a great time laughing around on the sets! The pink and golden cake looked gorgeous and delicious at the same time.

Actress Juhi Parmar also took to her social media account to celebrate a 100 episode run of her show Hamariwali Good News. In the post, she talked about how special the character was to her and how grateful she is to be a part of such an amazing show. Take a look at her post!

Also read: Hamari Wali Good News: These Cute Little Moments Between Renu And Mukund Prove That Love Is Not Defined By Age

Juhi Parmar and Shrishti Jain, who play Renuka and Navya in the show also participated in a candid live session on the sets. Watch it here:

In this adorable Instagram live, the two actresses also included their male costars and thanked the viewers for their constant love and support for the show. 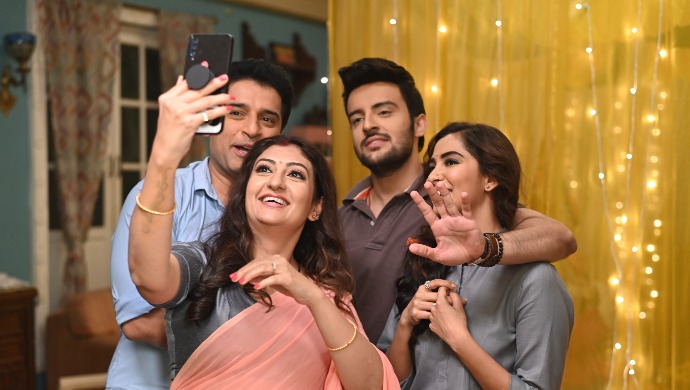 They also spoke about their journeys and their characters and how exciting the entire experience has been. Viewers also had a chance to witness their off-screen friendship and chemistry and it was a great live session to celebrate their 100 episodes!

We hope the shows keep crossing such milestones and keep their audiences entertained!