Kareena Kapoor Khan’s Weekend Is Full Of ‘Me-time’; You Won’t Be Able To Overlook Her Pic

Kareena Kapoor Khan enjoying her weekend while relaxing In the blue’s with her flawless skin. The Jab We Met star will surely steal your heart. You can’t afford to miss this

For admirers, Kareena Kapoor Khan’s social media is a real delight. Since her Ig appearance, the Beauty queen had a talent for keeping her viewers captivated with her updates. The starlet from Jab We Met is known for creating lovely photos of herself on media platforms, which rapidly go widespread. Sticking on her current trajectory, Ra.one actress is getting attention once again with her latest Instagram snap, which is turning heads for all the best of reasons.

Heroine actress was seen lounging and savoring the Saturday spirits in the photo. She was noticed sitting on the sofa, wearing a white Gucci t-shirt. Ki and Ka actress then went on to show showcase her aesthetic manifesto by giving the weekend blue a humorous twist. Kareena had attempted her shot at blue eyeliner in the photo, which was flawless and enhanced the actress’ attractiveness. Her hair was also left open to complete the appearance. Kareena wrote on the photo “Blues” with a love emoji, making it obvious as she adored the blue eyeliner she was wearing. 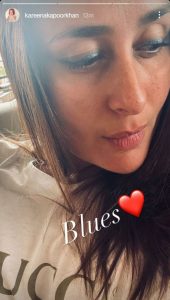 On January 15, the Laal Singh Chaddha actress was spotted while entering Her Father Randhir Kapoor House, Kareena Kapoor Khan, and her sons Jeh Ali Khan and Taimur Ali Khan dressed casually for a visit to Randhir Kapoor’s residence on Saturday afternoon. At Randhir’s, Karisma Kapoor spent the afternoon with Kareena, Jeh, and Taimur. On Saturday, the Kapoor daughters made a point of spending bonding time with their dad, and the girls have been seen entering in casual dress to the old actor’s home yesterday. Jeh Ali Khan, Kareena’s son, and Taimur Ali Khan were also present to spend time with their grandfather.

Taimur Ali Khan, the child of Kareena Kapoor Khan and Saif Ali Khan, is one of Bollywood’s most widely famous children. When he makes a big presence alongside her mom, the Starkid invariably strikes the paparazzi breathless. A flashback video of the cute boy, in which he falls victim to the Turkey ice cream hoax, has lately gained wide popularity. Taimur is clad in a grey hoodie and black pants in the clip, standing in front of the stall. He offers a mournful expression as he tries to grab his ice cream cone from the hawker, but persists to tease the little munchkin. “Don’t do that!” he tells the seller, but he ignores him and continues to play with him. This video has captivated the hearts of the people and turned everyone into a Pataudi fan.

On the work front, Kareena will next be seen in the film Laal Singh Chaddha, which also stars Aamir Khan. She’s also collaborating with Ekta Kapoor on a project.