Puri Jagannadh’s birthday celebrations on the sets of Liger

Puri Jagannadh, one of the most loved filmmakers of Indian Cinema, turns 55. Check out the images of his birthday celebrations in Goa, with the entire team of his upcoming movie “Liger”!

Director Puri Jagannadh celebrated his 55th birthday on the 28th of September, and on this special occasion, the team of his upcoming movie “Liger” and actor Vijay Deverakonda threw the director a grand birthday party in Goa. The pictures went viral on the internet. Puri Jagannadh was showered with immense  love and wishes on his special day, this party thrown by the entire team was just like a cherry on top!

The director is currently shooting in Goa for his upcoming film “Liger” with Vijay Deverakonda and Ananya Panday.

Celebrating his birthday on the sets of the film, Puri Jagannadh’s production house shared many photos on Instagram. The filmmaker can be seen cutting a cake along with veteran actress and producer Charmme Kaur and his leading hero of “Liger”, Vijay Deverakonda. 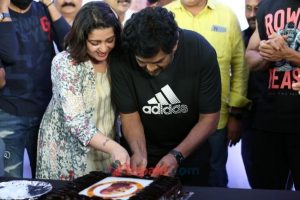 Puri had already received heartfelt wishes from Charmee Kaur on Tuesday (September 28) bestowing love and good wishes upon him. The star cast of “Liger”- Ananya Panday and Vijay Deverakonda, who will be sharing romantic screen space in the movie, had uploaded lovely posts appreciating and thanking Puri with utmost warmth and love.

The creative director and talented actor combination never really goes out of style, and this can be seen from the beautiful equation shared by Puri Jagannadh and Vijay Deverakonda who are working together for the action and romantic drama “Liger”, which is based on boxing. The photos were all over the internet, Puri is showered with hugs and kisses, and lots of laughter. 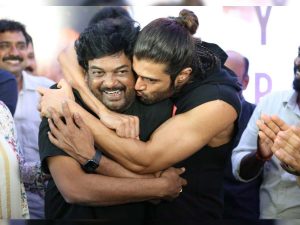 “Liger” is being produced jointly by Puri Connects and Karan Johar’s Dharma Productions. “Liger’s” cinematography is being done by Vishnu Sarma and Kecha from Thailand is the stunt director. The film also features Ramya Krishnan and Ronit Roy in prominent roles. The film is being made in Hindi, Telugu, Tamil, Kannada, and Malayalam languages.
Also read: Puri Jagannadh Turns 55 Today- receives sweet wishes from Ananya Panday
Copy Link