Kangana Ranaut To Enter Politics? Says, If People Like Me And Support Me, Then I Would Love To’

Will Kangana Ranaut enter politics in real life after Thalaivii? Read on to know your answer.

Kangana Ranaut is essaying the role of late J. Jayalalithaa in the biopic titled ‘Thalaivii’. Kangana speaks on her thoughts about entering politics and how the role of a politician has changed her thinking about the politicians at a recent press conference According to a report in ETimes, Kangana said, “I had a very primitive thinking about politics. Like these are very lucky people who get so much power. But after working in this movie and doing research my thinking changed. I realised that politics is not at all easy and there are a number of challenges.”
Speaking about her plans on entering politics, Kangana said, “This movie might not be released in Hindi in multiplexes and multiplexes have always tried to bully the producers. And they are the same. I am a nationalist and I speak for the country not because I am a politician but as a responsible citizen. And as far as entering politics is concerned, I might need a lot of support from the public but right now I am happy to be an actress. But if tomorrow people like me and support me, then definitely I would love to.” 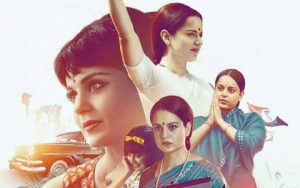 The story of the film revolves how J Jayalalithaa changed the course of politics after she entered politics and how it benefitted her supporters and how everything changed for better and changed the look of the state as a whole. However her mysterious death in real life shocked many.
The film also has Arvind Swami as Tamil Nadu politician and veteran actor MGR and the teaser of the film received amazing response from the fans and the final film was indeed a blockbuster not worth missing out on. The film, has released in Tamil, Telugu and Hindi, has been produced by Vishnu Vardhan Induri and Shaailesh R Singh. The film is a directorial by Vijay.