Julia Fox Opens Up About Her Being Compared To Current Beau’s Estranged Wife Kim Kardashian; Her Reaction Is Surprising – DEETS INSIDE

Amid ongoing romance with Kanye West, Julia Fox is facing criticism as she imitated some fashion choices of Kim Kardashian, and now she opens up about how she feels on the same

Julia Fox is presently in the headlines for her relationship with Kanye West, and it’s become a show time for her. Well, romancing the estranged husband of Hollywood’s top beauty mogul will cost you something, but Julia doesn’t seem to care.
Julia Fox, Kanye West’s new girlfriend, is unconcerned by claims that she is imitating Kim Kardashian’s style. Julia’s buddy informed a popular web portal that the New York socialite “washes it down” that others think she’s emulating the 41-year-old wealthy beauty. “All Julia wants to do is make Kanye happy,” they explained.

Kanye, 44, took Julia to Paris for Paris Haute Couture Week this past weekend, as fans of the Kardashian-West debacle recognize. They went to a lot of haute couture together. Julia donned the very same Balenciaga mirror boots that Kim is noted for on Saturday, Jan 22.

Despite the fact that Julia recently sported the same outfit as Kim, as seen on Julia’s Instagram, a second source revealed to us that Julia “is no blatant copy”. “She is a successful woman in her own right,” a source told that “Julia knows” to the website. What she’s putting herself into by dating Kanye West, as well as the parallels that will be made to her. 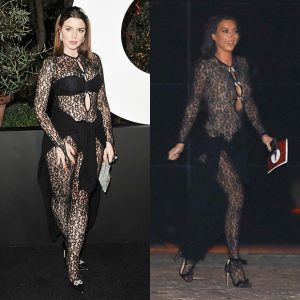 Kanye is fascinated by her because she is a powerful woman who makes things happen. She’s not worried about the outside commotion, and she’s excited to see what Kanye can accomplish in the future.” So, how does Kanye think about being likened to his short ex-wife by his present lady love?

Also Read: (Julia Fox To Reprise The Role Of THIS Person In Madonna’s Biopic – FIND OUT)

“Kanye is much more candid with Julia on intent, and he doesn’t appear to bother her discussing their connection,” the source claimed. Julia, it appears, doesn’t either! “Any unfavorable criticism does not bother her,” the person stated. “Julia is enthralled by it all. She and Kanye get along swimmingly.”