Salman Khan and Aayush Sharma starrer Antim: The Final Truth is all set to release in theatres on November 26, 2021. Ahead of the trailer release of the film, Bollywood actress Katrina Kaif took to her Instagram account to praise the look of Aayush Sharma in Antim

Antim: The Final Truth is the most anticipated film of Salman Khan and his brother-in-law Aayush Sharma. The film is all set to release in the theatres on November 26 this year. The makers of the film had dropped two motion posters of the films that give us intriguing vibes. Along with Salman Khan and Aayush Sharma, the film stars Pragya Jaiswal and Mahima Makwana in the lead roles. The film is based on the 2018 Marathi film Mulshi Pattern.

The trailer of the film is all set to release today that is on October 25, 2021. In the motion posters of the film, the look of the lead actors can be seen clearly and give us a clear idea about the storyline. It is seen that Salman Khan will essay a role of a Sikh cop whereas Aayush Sharma will play a deadly gangster. For the first time, Aayush Sharma will be seen essaying the role of an antagonist. The look of the Loveyatri actor has created hype not only among the audience but also among the other Bollywood actors. 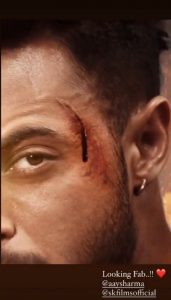 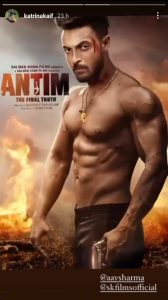 Bollywood actress Katrina Kaif took to her social media accounts to praise the look of Aayush Sharma in his upcoming film, Antim alongside Salman Khan. Katrina Kaif took to her Instagram stories and shared the motion poster of Aayush Sharma’s look in his upcoming film Antim. While sharing the video, Katrina wrote, “Looking Fab..!!”, along with a red heart emoji. She also tagged Aayush Sharma and Salman Khan Films in her Instagram stories. In her next story, she shared the motion poster in which Aayush’s entire look along with a fierce background can be seen.