In the earlier episode of Yaare Nee Mohini, Belli prays that she gets married to Muttu. The villagers tell him that if he ties the knot with Maya, it won’t be good for the village. They also tell him that it is better to wed Belli than Maya as they would make a powerful couple.

In this week’s episode, Maya is frustrated with the fact that she added salt to Muttu’s coffee instead of sugar. She also blames herself for making such a blunder and wonders why she didn’t even taste it before giving him the coffee.

Shanmugam and Belli are talking about Muttu and how he must realise his feelings for her himself. She also asks Shanmugam why he challenged Maya that Muttu will confess his love for Belli within 20 days and wonders what will change in the next few days.

Maya’s mother comes to talk to Muttu. She is infuriated with the fact that her daughter has not informed her about her marriage. She also says that Maya should not be staying in Muttu’s house before her marriage. Muttu does not reply. 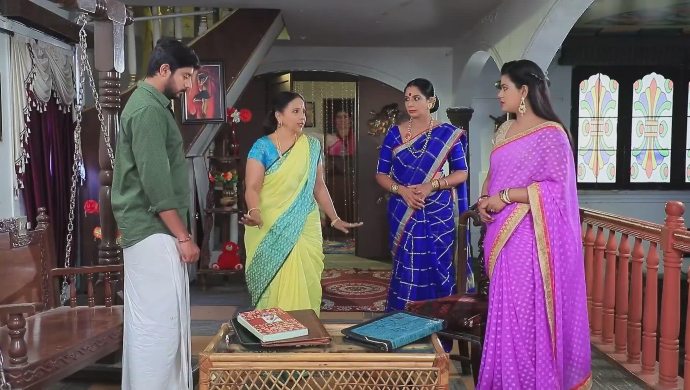 Maya’s mother questions MuttuShanmugam tries to reveal the truth about Maya so that Muttu realises that she is not the right girl to be marrying. He also brings out the truth about Maya trying to transfer all the money of the mill into her own account. When she is accused, she tells him that she had reasons for doing so.

Muttu doesn’t want to listen to anything she has to say. Maya’s mother talks to her and tells her that she must leave that house and go back home with her.

A few days later, Muttu’s aunt is admitted into hospital. Maya goes to the hospital and asks him if he would like to go to the temple with her. Shanmugam tells her that he must stay in the hospital. Maya then goes and prays to God asking him to forgive her for everything that she has done before.

Catch all episodes of Yaare Nee Mohini exclusively on ZEE5!