We really thought that life would be easier for Mrudula (played by Madhubala) as Sampangi, in the Telugu TV show Ninne Pelladatha. Madhu (played by Abhi Prathap), the Kamineni family and Brahmini had come to hate Mrudula. In such a situation, she found shelter under the guise of Sampangi, a village girl. She helped her husband get better and has also managed to win Brahmini’s heart with her deeds. But, the trouble named Sarayu (played by Sarayu Roy) always lurks around, turning the good into bad. And this time, it’s no different.

In the spoiler for the episode airing on August 22, 2019, we see that Sarayu is in Brahmini’s house along with everyone else. She sees Sampangi bring food to the table and gets furious. She gets up from the dinner table and walks towards Sampangi. Sarayu tells her how easily she has walked into her trap and holds her by the neck and drags her close to the door. Once there, she pushes Sampangi with all her might and starts yelling. Everyone is taken aback by Sarayu’s sudden outburst of aggression. Madhu picks Sampangi up and stands next to her. Sarayu tries to inch closer, but Brahmini’s authoritative voice stops her. 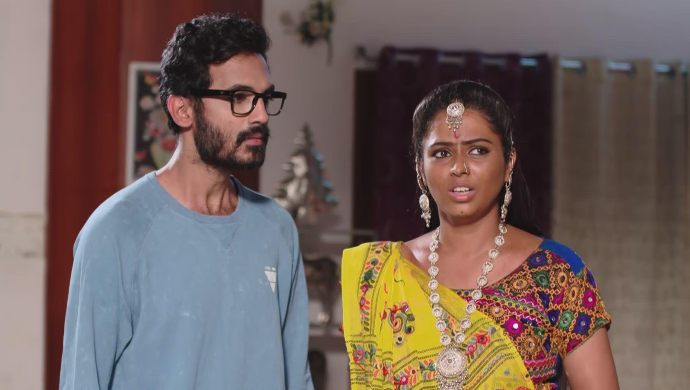 Madhu and Sampangi in Ninne Pelladatha (Source: ZEE5)Brahmini comes closer to the girls and suddenly her demeanour changes to calm and composed. She calmly asks Sarayu why she was aggressive and what the problem was. Sampangi says that she is not at fault and she couldn’t take it when Sarayu tried to slap a young girl (Jabilli). Brahmini turns to look at Sarayu but she goes out and aggressive again. She says that there is no place for conversation and Sampangi has had it from her — for having the guts to touch her and rebel against her. Everyone looks at the two in disbelief. Sarayu raises her hand to slap Sampangi again. But before one could react, Sampangi holds her hand and gives a deathly stare.

Stay tuned to find out what happens next. Check out Kalyana Vaibhogam on ZEE5 now.