Naagini Is Set For A Major Twist: 9 EXCLUSIVE Pics From The Upcoming Episode 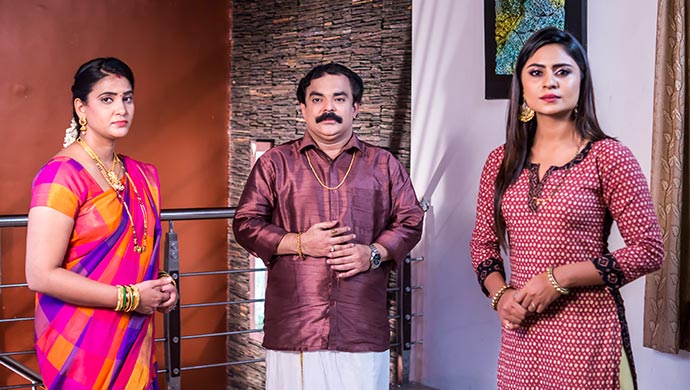 In the last recap on Naagini, we had learnt that Arjun left for a few days to find a cure for Amruth’s eyesight. Since then a lot has happened. Hema discovered the truth of both Amrutha (played by Deepika Das) and Arjun (played by Dheekshith Shetty). Rudra, Sowparnika, Vishnu and his mother made several attempts to kill Amrutha but failed. On the other hand, Arjun tried to retrieve the sacred flower to cure Amrutha but got distracted by Urmila. While Amrutha managed to get rid of Urmila’s control over her, Arjun is still entranced by her. Finally, with much efforts of the antagonists, Amrutha is thrown out of the house which causes Arjun to get furious when he returns.

Amrutha later blesses a couple, who offers her shelter. Well, that’s all you will see till today because what we are about to show is all EXCLUSIVE pictures of an episode that is STILL NOT ON-AIR! Isn’t that super cool?

So the couple who took her in is Vaishnavi and Vijay Kumar. While Vaishnavi’s mother Dakshayani finds Amrutha’s aura fishy, the couple just adores her.

A Serious Pose Appropriate To The Situation 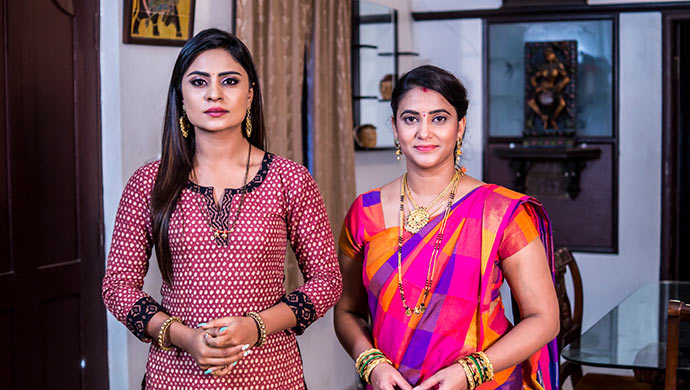 Presumably, Amrutha is revealing her true nature to them and that’s why the situation looks so serious. Both Amrutha and Vaishnavi look at the camera for a pose while in that onscreen emotion. 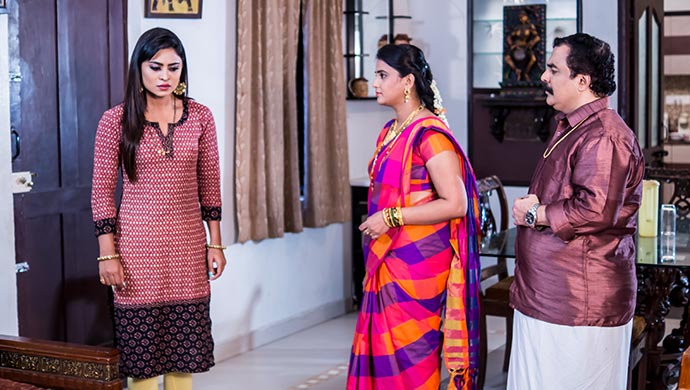 Don’t you think so too? According to me, since Amrutha revealed her truth maybe the couple is curious to know more or maybe they are worried. You will have to stay tuned to the next week’s episodes to find out.

At The Dinner Table 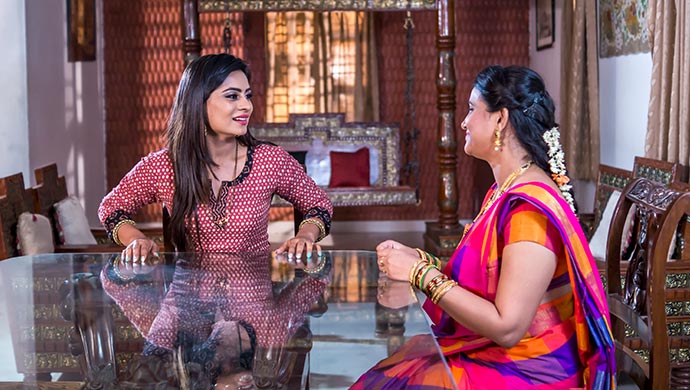 It looks like Amrutha has already made friends in Vaishnavi and they both look really jovial together. Don’t you think?

A Sincere Prayer Does Wonders 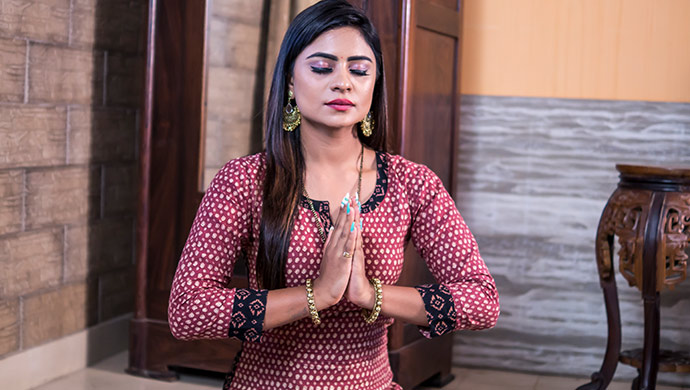 Amrutha looks deep in devotion as this candid was clicked while on-shoot. If you ask me, she is praying that she can soon see her Arjun, what do you think? 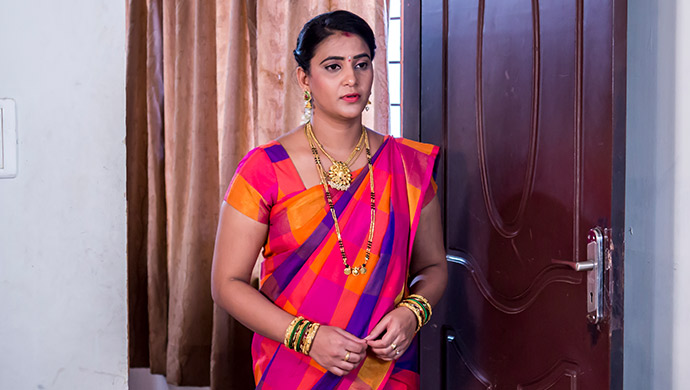 Could she be judging Amrutha? Or is she worried about her mother Dakshayani’s reaction if she finds out who Amrutha really is? You’ll if you stay tuned to next week’s episodes. 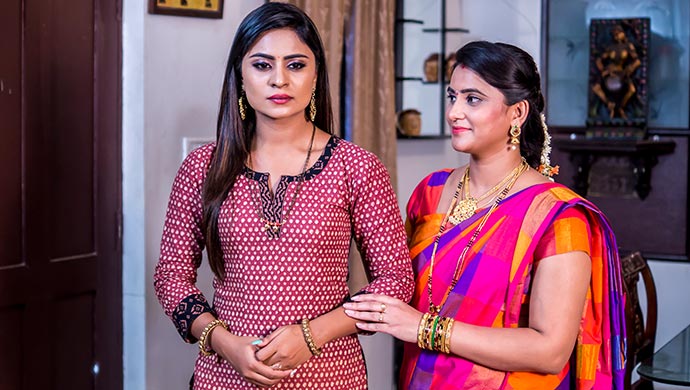 From this picture could it be possible that Amrutha’s eyesight, that Shiv Sevaka had returned to her has gone again? Vaishnavi seems to be aiding her, so presumably, for some reason, it seems that she has gone blind again.

Vijay Kumar Caught In Between Shoot 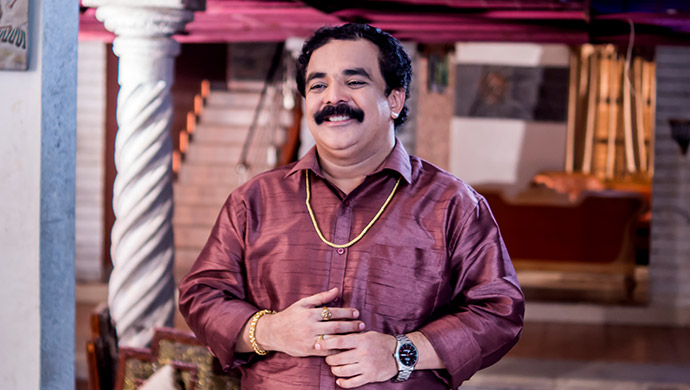 Yes! Another candid. Looks like while shooting Vijay got distracted and burst out laughing. The crew generally have great fun during such ‘blooper-moments’. 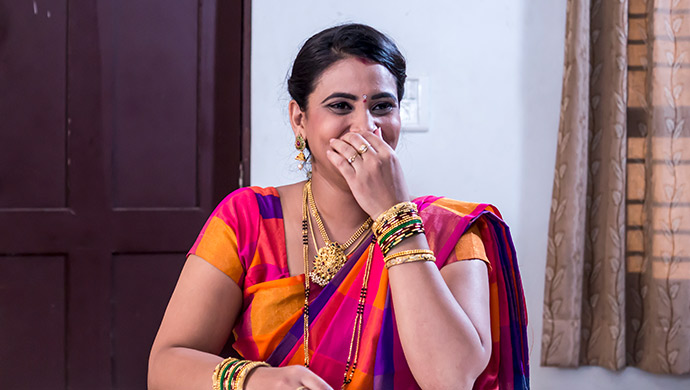 Vaishnavi too seemed to have slipped from a serious moment on-screen to a goofy picture where she looks kind of embarrassed. You won’t get to see these candid moments on TV, so go back and take a look once again at this gallery.

What do you think this episode was about? Let us know in the comments section provided below.

If you like Zee Kannada shows and have missed the TV-time, go to the ZEE5 platform and watch them anytime, anywhere.