In tonight’s episode, Srishti finds out that their lawyer has deceived them. When Sarla knows, she is worried but Karan assures her that all is well.

In the previous episode of Kundali Bhagya, while in jails, Preeta gets scared whether Karan will save her or not. But Karan, on the other hand, is sure that Mahira will take the case back because he has promised to marry her. He relies on the video evidence that proves Mahira was not pushed intentionally by Preeta. Mahira also reveals to Sherlyn that she will not actually take the case back.

Meanwhile, Karan has a conversation with Rishabh and tells that Mahira will withdraw the case, but hides that he has promised to marry Mahira. Both of them hug each other because Karan feels sad. On the side, Sarla announces to everyone at home that Preeta trusts Karan, she doesn’t. But Rishabh convinces her that Mahira will stick to her word.

Mahira and Karan are on their way to the court and she pretends to have injured her ankle. She tells Karan to go ahead and wait for her at the court, while she goes and sees the doctor. Sherlyn gets a call from Preeta’s lawyer whom she bribed. She learns that he will not fight the case unless Sherlyn pays him the promised amount.

In tonight’s episode of Kundali Bhagya, Preeta’s lawyer is with Sherlyn in the car and he threatens her that he will purposely win the case if she didn’t pay him the bribe now. Srishti sees this on her way and rushes to the court. The Luthra’s and Arora’s arrive at the court and exchange bitter looks with each other.

Preeta also is present there, surrounded by lady constables, brought in the police van. Srishti reaches court and tells Sarla that their lawyer is deceiving them. When the lawyer comes, Sarla slaps him tightly and says that he broke his promise of getting Preeta out of jail. 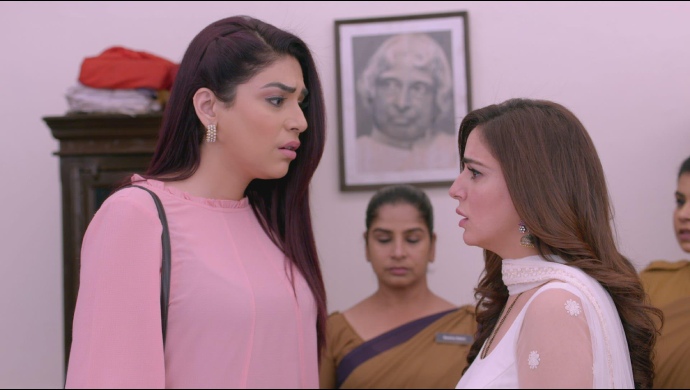 The lawyer refuses to fight their case anymore. Karan asks another passer-by lawyer to help them and assures Sarla that everything will be alright. In the courtroom, Srishti tells Preeta about the outside happenings and the latter gets tensed. Later, Sherlyn is confronted by Srishti about her plan and the former is threatened that if she tries to her Preeta and her family, she will have to regret her life.

To know more watch all the episodes of Kundali Bhagya on ZEE5.

Don’t forget to tune into your favourite Zee TV shows on ZEE5!