In the next episode of the show Kumkum Bhagya we will see how Shahana manages to get hold of Pallavi and Vikram. She narrates the incident of Rahul falling unconscious and everyone is shocked. She further says that there is one last way of stopping the marriage. She asks Dadi and Pallavi to fight and throw the items in the mandap so that a scene is created and the wedding is called off. On the other hand, Sarita reaches the room in which Aryan is waiting. He tells her how Prachi replaced Maya and shows her the unconscious body of Maya. Sarita is shocked. She tells him how Shahana has gone to the mandap to create a scene.

Further, we will see how Maya’s bade papa observes the bride and he becomes doubtful. He points his gun at the bride and says that she can’t be Maya. When everyone asks, he explains that Maya was wearing her mother’s kangan and the bride is not. Ranbir saves Prachi by saying that she is Maya but she has taken an oath of not speaking to anyone w=until the marriage is done. He also says that he asked Maya to take off the bangles as they were hurting her! Maya’s bade papa goes to fetch the kangan from Maya’s room. Aryan and Sarita try to search the kangan as they receive a text from Ranbir. They manage to fool Maya’s uncle. 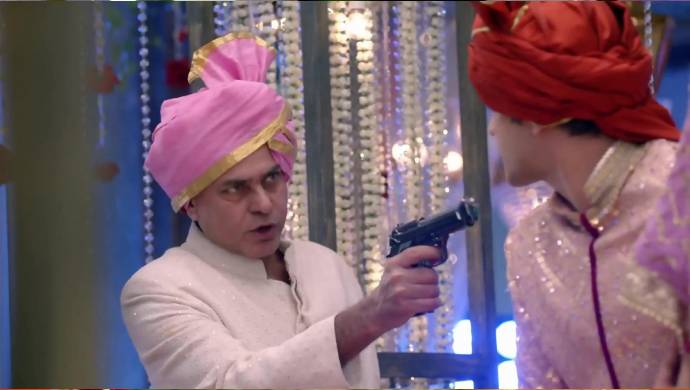 Meanwhile, Pallavi starts arguing with Dadi. She also abuses her mother-in-law and calls her a miser. Dadi also starts bickering with her daughter-in-law and calls her erratic and stupid. The words change into actions and Pallavi starts destroying the mandap. While Dadi also becomes violent and Vikram tries to stop them. Sarita reaches there and tries to stop them from fighting as she has to tell them that Maya is not the bride but Prachi is!