Kumkum Bhagya 10 September 2020 Written Update: Aryan And Shahana Come Up With A Plan

In the next episode of Kumkum Bhagya, we will see how Prachi is spotted by Maya’s uncle and he starts questioning her. But Prachi has her dupatta on her head and this helps her hide her face. She speaks in a different accent and manages to fool Maya’s uncle. Later, he asks Ranbir, who has called Sarita. Ranbir tells him that he is the one who invited her for catering. On the other hand, Maya’s boyfriend Rahul pays money to a dancer at the wedding and exchanges costumes with him. He sneaks into the venue disguised as a dancer.

Shahana is also dressed as one of the male dancers in the troupe and spots Aryan. She tells him about her plan with Prachi and also that they have arrived to stop the wedding. Aryan says that he will help them and they spot Rahul in the disguise. Shahana calls Prachi as she has to divulge the details to her. When they meet, Aryan tells Prachi that Maya has changed her mind. 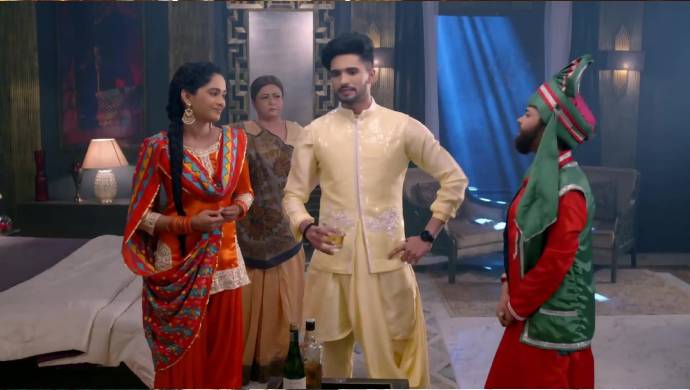 On the other hand, Rahul goes to Maya’s room and talks to her. Maya asks him to leave, but Rahul refuses and says that he has come for her safety. But Prachi and Shahana know that Rahul has a drinking problem. Along with Sarita and Aryan, they make a plan to get Rahul drunk. They do so to make Rahul come out with the truth about Maya and his relationship!

To know what happens next, Stream Kumkum Bhagya premiere episodes before Tv only with ZEE5 Club Pack! Avail exclusive films, ZEE5 Originals, and series at just Re 1 per day!