Get ready for some high-voltage drama in Khasma Nu Khani. Read on to know more.

Deshpreet (Harsimran Oberoi) loses her cool at Arman (Navdeesh Arora) and Simple (Sukhpreet Trehan). This episode will make you hoot for Harsimran Oberoi’s acting chops. Let’s get into it.

You can watch the premiere episode here:

Deshpreet’s task force celebrate the success of the tiffin business, but Deshpreet looks lost in her own thoughts. She acts detached from the group and this leaves the team puzzled.

Deshpreet decides to leave everything

Even though Deshpreet asks Shivam to help her in retaining custody of Purab, she gets scared thinking about the long legal battle and Purab’s childhood getting caught up in it. Thus, she decides to leave everything and go back to her village. However, Deshpreet wishes to see Purab one last time, so she goes to Arman’s house as Sona.

Arman’s mother brings a glass of milk for Purab, but he refuses to drink it as he is missing his mother. Simple arrives with Arman and she snatches the glass from the lady. Simple wants him to behave properly, thus she tells her to leave him hungry. Even Arman agrees with her. This leaves Arman’s mother angry. A few moments later, Sona arrives and Simple tells her to look after Purab.

Deshpreet meets Purab and gives him food to eat. Purab is enjoying his meal when Simple arrives on the scene! 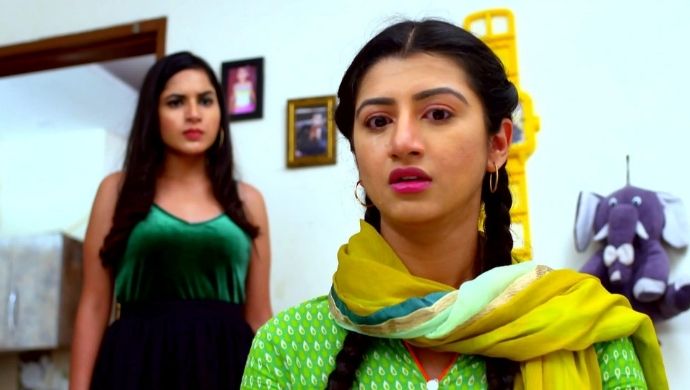 A still from the show (Source: ZEE5)

Simple finds out that Deshpreet is Sona! She drags her to the hall and creates a big drama before Arman and his mother. Simple mocks Deshpreet’s love for Purab and ridicules her illiteracy.

Simple tries to push Deshpreet out of the house. Purab interferes and this makes Simple angry. She is about to slap Purab when Deshpreet stops her.

What follows is something that you need to watch. Deshpreet shows her angry avatar to Simple and others. Even Arman gets scared of her. Simple ends up suffering some bruises on her hand and Deshpreet decides to revoke her decision of leaving Purab.

Deshpreet’s anger will impress you a lot. To know more about what happens next, keep reading this space.

To know what happens next on Khasma Nu Khani, watch the premiere episode on ZEE5 Club before TV