EXCLUSIVE: 12 Unseen Pics From Naagini Which Prove That Arjun Is Unhappy

Naagini: The Age-Old Rivalry Between Urmila And Bhairava Is Quite Evident 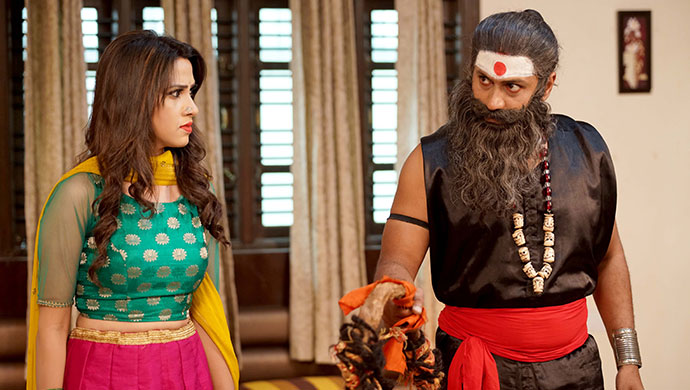 You must be aware that Urmila, who is an Apsara from Apsara Loka, has been trying to get her hands on Arjun for a while? Just recently we learnt that she is planning to take Arjun to Apsara Loka!! Thankfully, fate didn’t go according to Urmila’s plan and Arjun is still on earth. But it doesn’t seem any better for Arjun who has been desperately looking for Amrutha while trying to tackle Urmila’s magic over him at the same time. Vishnu and Rudra seem pretty comfortable having Urmila, who goes by the name of Mani in the house, as their daughter-in-law. Amongst all this, Hema’s say is equivalent to nothing (she has always loved Amrutha as her daughter).

And Bhairava apparently is trying to find a permanent solution for the Naagini’s demise and for the same reason has made an unusual alliance with Urmila, in the hope that two common enemies can make good allies.

In these EXCLUSIVE pics, we are about to share, however, it doesn’t seem like Urmila and Bhairava are getting along very well. Let’s take a look at a few more pictures to give you a glimpse into the future. 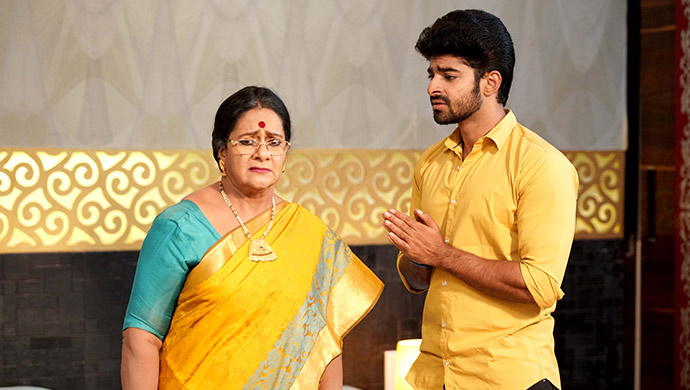 Arjun’s grandmother seems to be helpless in the favour he is asking from her. Maybe he is just asking her not to pressurise him to get married to Urmila? Whatever the reason, you’ll find out soon.

Naagini: Grannys Can Be Annoying At Times 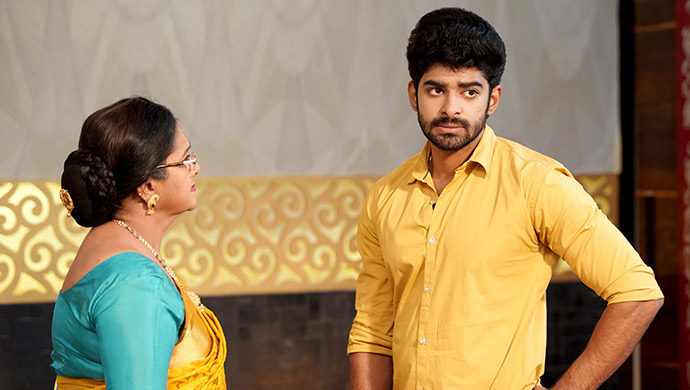 Looking at this pic, it seems like Arjun is annoyed with his grandmother’s coaxing. He also looks like he wants to walk right out of this conversation, isn’t it?

Naagini: Arjun’s Granny Is The Most Persistent Of All

Despite his reluctance, Arjun’s ajji seems to be giving him some big news by asking him to pay attention. To find out about what they discussed stay tuned. 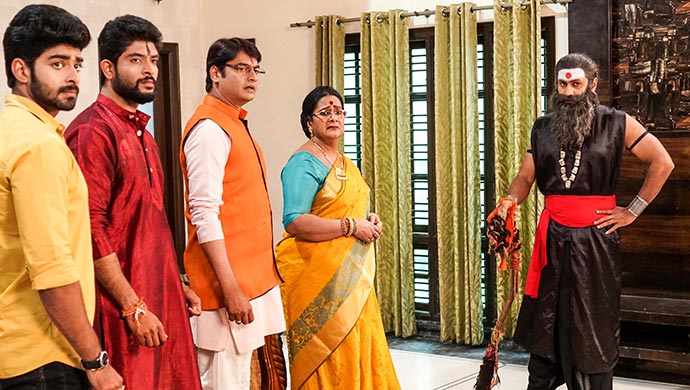 Whether this person is their friend or foe, we will find out soon. But according to this pic, everyone including Vishnu and Rudra seem to be startled at whoever is in the direction where everyone is looking at. 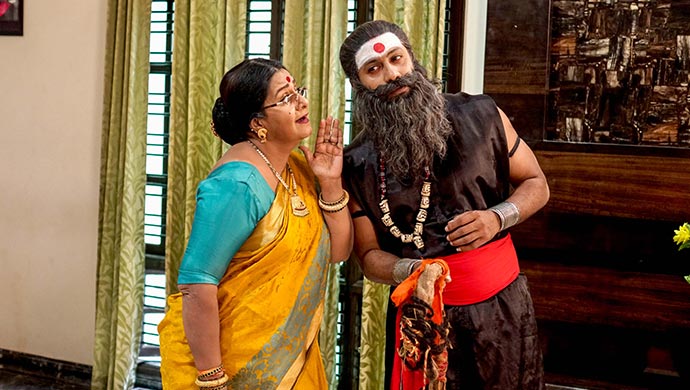 Arjun’s ajji and Bhairava are all ears for each other in-between shoots. Well, for actors having fun with their team while waiting for their shots is a must to relax from whatever they are doing. These two seem to be in their element!

Naagini: Another EXCLUSIVE Still Of Everyone Together 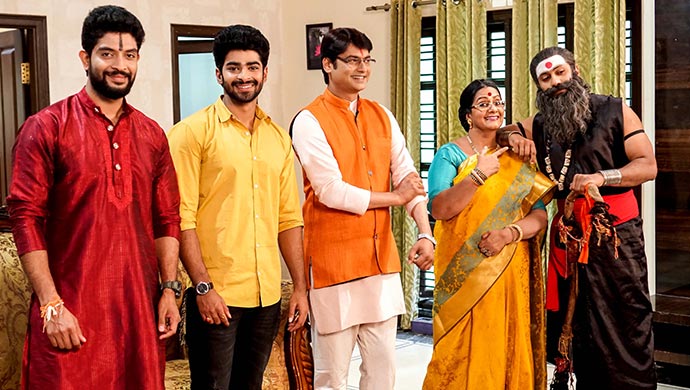 Everyone is smiling in one frame! Can you believe it? Vishnu, Rudra and even Bhairava are all smiles for the camera! #pictureperfect

While a few of these characters are in their onscreen element, Urmila, Vishnu and Rudra decided to break the stereotype and give us candid smiles. What more do we want as fans right?

Naagini: This Priest Is The One Who Probably Startled Everyone 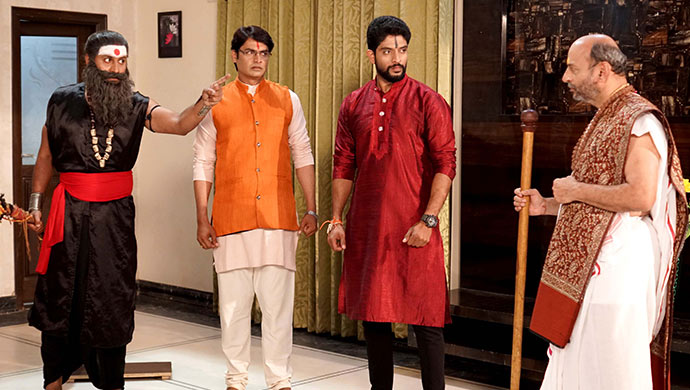 This priest doesn’t seem like a friend to Bhairava, Vishnu or Rudra so clearly they aren’t comfortable with him around. Maybe he is Amrutha’s well-wisher that’s why he isn’t appreciated in Arjun’s house. Our guess is that they will battle it out soon enough to see who is more powerful. Who is your favourite? 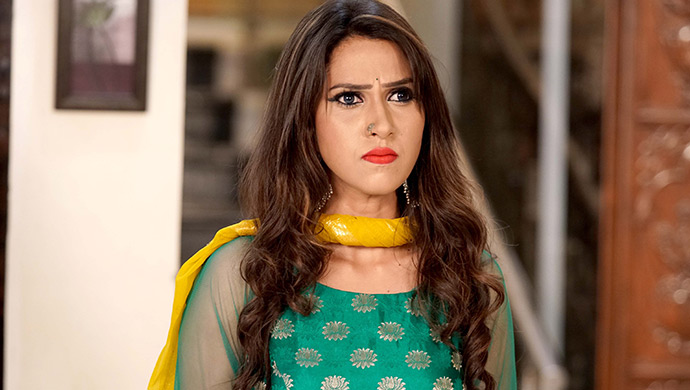 What has got Urmila so angry? Is it Bhairava? Or the priest perhaps? Who so ever it is isn’t going to be happy a few seconds after this. Let’s wait and watch to see who she is angry with.

Naagini: What Is Bhairava Cooking Up In His Mind This Time? 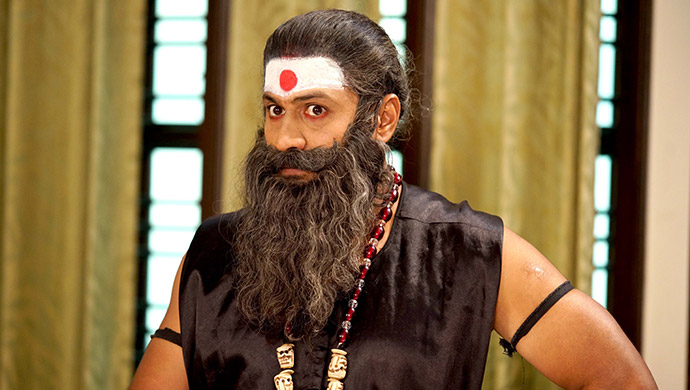 Bhairava is a very sly priest, who blindly believed Vishnu and Rudra when they told him that Amrutha is dangerous. Not only that, since then he has done everything in his capacity to kill, maim and injure Amrutha but unluckily for him, the divine power from the heavens above always come to her rescue. 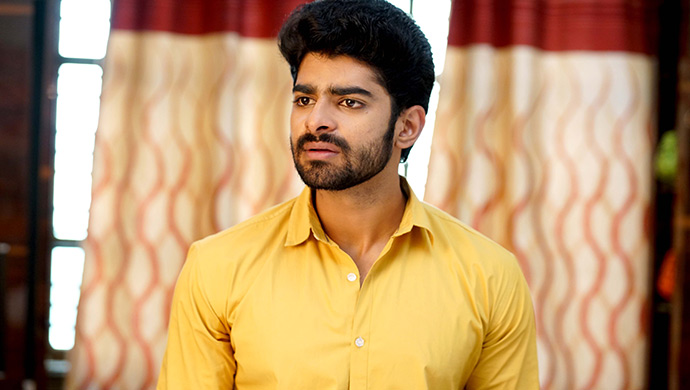 Arjun’s worried expression proves how lost he is without Amrutha. Despite all of Urmila’s magic, Arjun is attracted to Amrutha like a moth to a flame.

How many of you want Amrutha and Arjun to unite soon? Leave us a comment in the box below about your thoughts.