Read on to know why we think that Asawari needs to continue to keep standing up for herself rather than submitting to Soham’s tantrums.

The recent episodes of Agga Bai Sasubai have been all about Abhijeet’s (Girish Oak) Babdyagiri. This act of Abhijeet has created an uproar in the house as Soham (Ashutosh Patki) has been forced to change. Scared of Abhijeet’s tantrums, Soham has meekly accepted doing the household chores. It isn’t just Soham who’s leaning towards change but Asawari (Nivedita Saraf) as well. After getting to know about Abhijeet’s affair from Maddy, she decided to leave the house. While Abhijeet isn’t pleased with it, Shubhra (Tejashri Pradhan) is having a mini-celebration as Asawari has finally chosen to take a stand for herself. This has been a positive sign from her side and we think that she needs to take a stand more often.

Watch the episode where Asawari leaves the house in anger.

Soham put everyone in trouble with his whole act of pretense in the past few episodes. He lost his job, got drunk, duped people of their money, put Abhijeet in loss, and what not! Fortunately, everything has calmed down now thanks to Abhijeet’s Babdyagiri. However, we know that this won’t last forever as Soham will go back to being himself if no one keeps a check on him. But if Asawari continues standing up for herself, Soham won’t have a chance to do so. He will finally realise that Asawari isn’t his naive old mother who would accept Soham’s mistakes quietly.

If Asawari takes a stand more often, it will also establish her superiority in the house. In the absence of Ajoba, Soham is looking to dominate everyone. We saw that happening in the episode where he took the liberty of erasing Abhijeet’s name from the family and showing him his rightful place. Once Asawari gets in the position of power, Soham won’t even think of messing with either Abhijeet or Shubhra. Asawari has already promised Shubhra that she would make Soham change. If Asawari wants to prove her point, she would first have to change herself. This will only happen if she starts taking a stand for herself more often like she did in the case of Abhijeet. 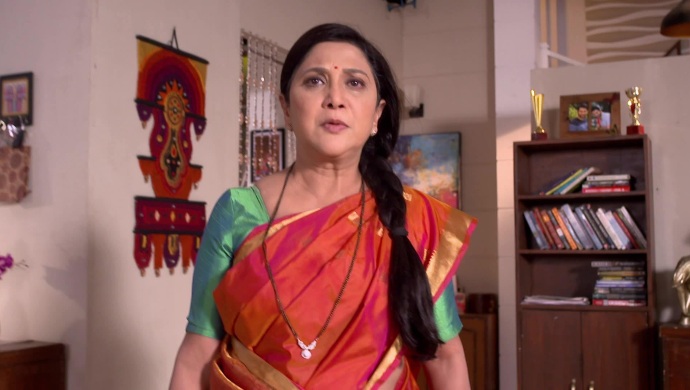 Watch the premiere episode of Agga Bai Sasubai with the ZEE5 Club Pack at the price of Rs. 1/day. ZEE5 Club Pack gives you access to your favourite shows before it telecasts on TV.