Be it Preeta – Karan or Abhi – Pragya, the on-screen romance certainly makes us miss our partner. Ever thought about romancing with one of those leads of the show. Well, now you can select your favourite lead to be a part of your family. ZEE5 brings you a fantasy gaming experience  ZEE5 Super Family League which will allow the users to make their own Super Family with ZEE5 stars. It also gives the opportunity to the fans to win exciting prizes through this game. Recently, your favourite stars interacted with each other and their fans, expressing how excited they are to be a part of ZEE5 Super Family League game. See how your favourite ZEE5 stars are urging their fans to select them.

In the big launch of ZEE5 Super Family League, Preeta and Sherlyn joined Ranbir, Choti Guddan and Anupriya for a fun conversation with their fans. They shared how excited they are about interacting with their fans in a new way. They also shared how fans have been tagging them and letting them know on social media how they are selecting Sherlyn, Preeta and others in their ZSFL family. Sherlyn seems pretty excited about the ZEE5 Super Family League. As she shared how characters like them end up just being a part of the show and later leave. However, now with ZSFL, they have a chance to interact with their fans and also their fans would remember them apart from the show. She also talked about her character and said how she is always ready to create problems in Preeta and Karan’s life, she would love to create problems in the new ZEE5 families. She also urged fans to select her as Sherlyn will make them earn more points.

Preeta was asked about selecting a male lead for her and she selected Abhi. While Sherlyn and Choti Guddan wanted Preeta to get paired with Agastya. Ranbir felt bad and said that he should leave the conversation as nobody is selecting him. Preeta then mentioned that she would love to get paired with Ranbir. She then asked fans to make new pairs and have fun through this new gaming experience. Sherlyn concluded saying that fans should select Sherlyn for masala and Preeta for glamour as they would make a perfect pair in any family.  Anupriya was asked to select her favourite beti between Preeta, Sherlyn and Guddan. Anupriya chose Choti Guddan and said that she is seen as bahu till now she can also be her daughter. Choti Guddan expressed that she is glad that Anupriya selected her.

The ZEE5 Super Family League is a new game by ZEE5 for their users to interact in a more fun way with their favourite ZEE5 stars. In an addition to that, they can also win exciting prizes for the same. All they need to do is download the ZEE5 application. Go to ZEE5 Super Family League and choose 6 family members. Your favourite stars are divided into different categories including Saas, Beti, Dost and Pati among others. After making a family, the stars would be doing as they are asked to do like dance, slap and sing. This would allow the user to earn more points. They can also change their family members whenever they want. 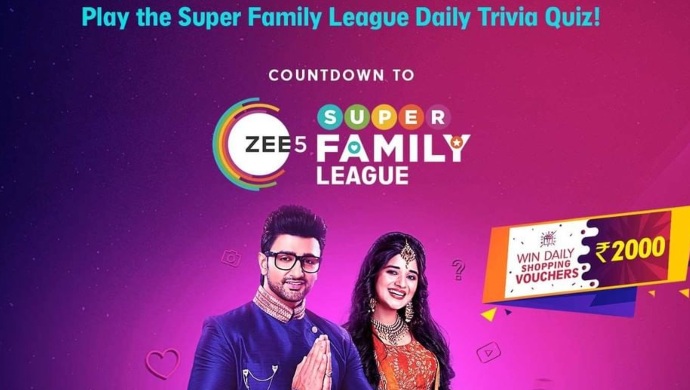