Yeu Kashi Tashi Me Nandayla: With Omkar Exposing Sushil To Save Sweetu, Will She Realize Her Feelings For Him?

In a recent episode of Yeu Kashi Tashi Me Nandayla, Omkar saves Sweetu from a fraudster and that gets Omkar and Sweetu even closer than before. Read.

In Yeu Kashi Tashi Me Nandayla, Sweetu and Omkar’s love story is further taking shape and fans are loving it. In a recent episode, Omkar saved Sweetu from a fraudster and that brought Omkar and Sweetu closer than before. We think it is only a matter of time before they realize their feelings for each other. Omkar and Sweetu’s love story is a key part of the plotline and we cannot wait for it to unfold.

Recently on Yeu Kashi Tashi Me Nandayla, Sweetu gets a marriage proposal from an ‘NRI’ named Sushil who claims to be based out of America. The Salvis immediately like him and decide to get Sweetu married to him. However, Sushil is up to no good and is a fraudster who has lied about his credentials.

In a surprising turn of events, Chinya comes to know about Sushil’s reality and swears to save Sweetu from this marriage. He lets Omkar know about Sushil and together, they decide to unveil Sushil’s truth. Despite their several attempts, they are unable to bring his reality to the fore. Eventually, Sweetu and Sushil meet and are asked if they would be willing to marry each other. While Sushil readily agrees, Sweetu is hesitant to say yes. 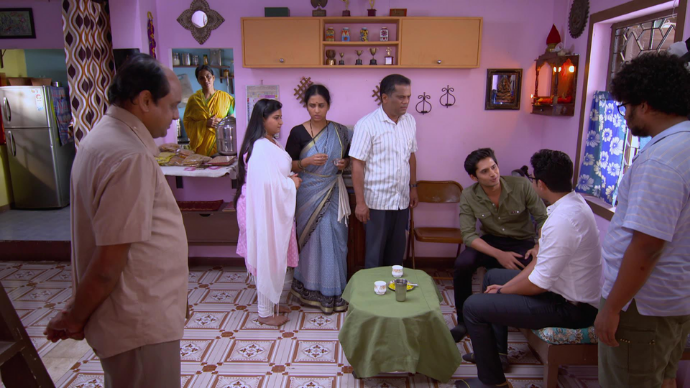 Seeing matter slipping out of his hands, Omkar decides to expose Sushil in front of everyone. He starts asking him questions about America to which Sushil has no replies. Omkar further probes Sushil about his credentials, leaving him dumbstruck. Seeing his odd behavior, everyone starts getting suspicious of Sushil. Eventually, he gets angry at Omkar for interrogating him and storms out of the house. He withdraws his proposal and leaves.

Like the rest of the Salvis, Sweetu is in shock and does not know how to react. She wasn’t ecstatic about marrying Sushil from the very beginning and Omkar made it easier for her. It is clear that Omkar cares for her a lot and will go to any extent to protect her.

Will Sweetu realize her feelings?

Sweetu was never ready to marry Sushil. She was quite hesitant about the marriage and never agreed wholeheartedly. Could her hesitancy mean she has feelings for someone else? She and Omkar have been growing closer day by day and have even shared romantic moments together. Omkar has helped Sweetu with her father before, defended her from Malvika, and now saved her from a fraudster. These things will surely prompt Sweetu to see Omkar in a new light but we’ll have to watch more to find out if she begins liking him.