Shaku and Nalu’s unusual friendship is winning our hearts. We must say, the two ladies are redefining friendship goals and how!

Yeu Kashi Tashi Me Nandayla primarily revolves around the sweet relationship between a mother (Shaku) and her daughter-in-law (Sweetu). But, the show has many subplots that make the family-drama, a must-watch. One such side storyline revolves around Shaku and Nalu’s unusual friendship that is winning our hearts. We must say, the two ladies are redefining friendship goals and how!

Shaku and Nalu’s friendship is quite unique and something we have never witnessed before. The two ladies belong to two very different backgrounds. Their lifestyle, likes, dislikes, clothing, etc. everything is diametrically opposite. While Shaku is filthy rich, Nalu struggles to make her daily ends meet. Despite their differences, their friendship is so pure and honest that it surely is redefining friendship goals.

Although lately, Nalu has been feeling quite inferior to Shaku (thanks to Malvika) and has begun questioning their friendship altogether. Even though Shaku has tried to change her mind many times, all her attempts have gone in vain. A recent spoiler has revealed that Shaku has finally given up on changing Nalu’s mind and that has made Nalu ponder over their relationship.

In the video, Nalu can be seen telling Shaku that they have drifted apart ever since she got rich. She tells her that even though she is happy for Shaku, she cannot keep showing up at her place as it does not feel right anymore. Much to Nalu’s surprise, Shaku does not stop her this time and this opens up a heartfelt conversation between the two best friends.

Nalu tells her that ever since she has gotten rich, her family has drifted apart. No one has time to talk to each other or be there for each other. Despite having so much money, her family is not happy. Her own daughter calls her Mrs. Khanvilkar and her husband doesn’t respect her. Only Sweetu is there for her and takes care of all her needs. 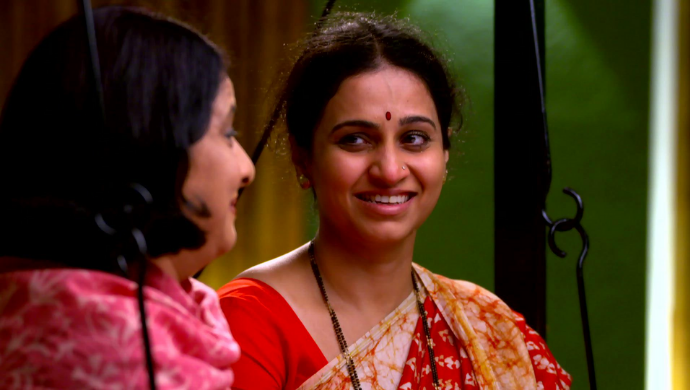 Shaku’s heartfelt words touch Nalu’s heart and a smile forms on her face. It is evident from Nalu’s expression that she is genuinely concerned about her friend’s well-being. Do you think their emotional conversation will make Nalu see their friendship in a new light? To find out, watch Yeu Kashi Tashi Me Nandayla only on Zee Marathi and ZEE5.