Will Ranbir Kapoor And Katrina Kaif Starrer Jagga Jasoos Be Converted Into A Web-Series? Director Anurag Basu Spills The Beans

Jagga Jasoos starring hunk Ranbir Kapoor and gorgeous Katrina Kaif was released in 2017 at the box office. The film was a result of Filmmaker Anurag Basu’s efforts and hard work. Unfortunately, the film couldn’t make it big at the box office but, it had a fan following because of Ranbir’s unique hairstyle, dance moves and acting chops that allured many. Beautiful actress Katrina Kaif’s fashionable looks and the way she made her presence felt in the movie amazed the audience.

But now Jagga Jasoos is again in the headlines with its amazing remarks that the comical film could be converted into a web series. Anurag Basu, recently revealed to Mid-day, “I wouldn’t name the platforms, but we had offers of developing it into a series. But if it didn’t work in theatres, how do we know it will work on OTT?” Adding further he said, “Pritam is excited about the idea, and wants us to start working on it. However, I am in a strange space [regarding it]. When you do something with so much love and it doesn’t work, you don’t want to try it again. The idea of starting Jagga all over again is enough to give me the chills.” Pritam is the music director of Jagga Jasoos and one of the most prominent musicians in the B-town Industry. 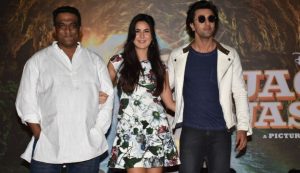 However, Anurag Basu’s statement has raised the excitement amongst fans with this news but, the filmmaker is reluctant to turn the film into a full-fledge web series. Another difficulty that Anurag Basu feels is Ranbir Kapoor’s busy schedule, speaking about Ranbir Kapoor Anurag Basu told the tabloid, “We keep talking about working together again, but that won’t happen anytime soon. Ranbir is extremely busy right now.”

Ranbir Kapoor is all set to amaze his audience and made them fall in love with him even more in his much anticipated upcoming projects like Shamshera, Brahmāstra, Animal and Luv Ranjan’s upcoming untitled film. Katrina Kaif, on the other hand, is also busy shootings for Tiger 3 and her upcoming films like Jee Le Zaraa and many more that are highly awaited by fans.