Who Is The Bigger Opportunist: Ajay Devgn In Golmaal Vs Arshad Warsi In Dhamaal

Ajay Devgn in Golmaal and Arshad Warsi in Dhamaal, both play the roles of opportunistic characters, who fall into a mess every time. Here is a fun little comparison of the two.

Dhamaal and Golmaal are two of the best contemporary comedy films of Bollywood that have earned their cult status. All of its characters’ quirks and punches never fail to make us laugh, no matter how many times we’ve watched it. So today, let us put two characters from the movies, against each other, like a funny card game! Gopal from Golmaal and Adi from Dhamaal are two opportunists we came across in Bollywood and it would be amusing to see them get pitted against each other.

Ajay Devgn in Golmaal plays the role of Gopal, a highly opportunist person, who is deep in debt. He lives with his three friends, who are as jobless as him. They have taken a huge debt from a local goon, Vasooli, and are on a constant run from him. While running, Gopal and his friends end up in a bungalow, where an old blind couple lives. Gopal immediately has an idea that he could fake it as the couple’s grandson, who they have not met in years, hence displaying volumes of his opportunism. Also, he is desperately trying to win the love of a girl, Nirali, and for that too, he will grab all opportunities he gets.

Arshad Warsi in Dhamaal plays the role of Adi, who is another opportunist. He too lives with three friends who are jobless and keep struggling for money. In order to earn some money, Adi thinks of a lot of plans that display his opportunism. We also get to see instances of those, when he is arguing with his friends about his share of the money or when he is looking for ways to reach his location, the St Sebastian Garden. 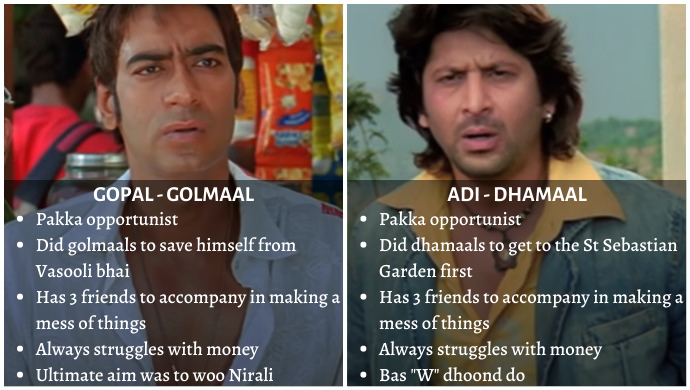 Besides being opportunists, both Gopal and Adi keep struggling with money with their three friends. And once they do manage to get some money, they spend it all partying. Well, maybe they’ve heard of the phrase ‘mah money, mah’ problems’.

While Gopal does not manage to achieve his ultimate aim in the end, he does get settled with the old couple after helping them. On the other hand, Adi gets to achieve his aim by the end of the film, by getting a share of the 10 crore rupees from under the bada wala ‘W’, and he makes the righteous choice of donating the amount to an orphanage. This proves that besides being an opportunist,  he also has a heart of gold.

Just because Adi had a better end to his journey full of dhamaal, we will let him have the advantage points and win the round. And who knows, Gopal might even manage to do some golmaal to turn the decision in his favour!

Watch their fun and exciting journeys in Golmaal and Dhamaal on ZEE5.