Liger: Vijay Deverakonda Reacts To His Film Getting The Biggest Release In Bollywood; ‘It’ll Bring Audiences Back Into Theatres’

Vijay Deverakonda’s Liger to get the biggest release in Bollywood. Here’s how Vijay reacted to the same

Liger is an upcoming romantic sports action film written and directed by Puri Jagannadh and produced by Karan Johar, Charmme Kaur, Apoorva Mehta, Hiroo Yash Johar and Jagannadh under the banners of Dharma Productions and Puri Connects. The film is been simultaneously shot in Telugu and Hindi languages. The film stars south sensation Vijay Deverakonda and Ananya Panday in the leading roles. The release strategy of Vijay Deverakonda’s Hindi debut Liger is being described as the one bigger than even Rajinikanth by those close to the project.

Producer Karan Johar will make complete efforts to project and market Vijay as the ‘Next Best Thing’ in Bollywood even bigger than Prabhas. “The last time we saw Karan so charged about one of his actors’ debut was when he launched Varun Dhawan (in Student Of The Year),” a close friend of Karan told Bollywood Hungama.

Liger director Puri Jagannath is been partying lately with Vijay Deverakonda and Karan Johar in Mumbai. Puri is now planning another action film with Vijay. According to a Dharma source, “Vijay was unstoppable in Telugu cinema. Now with Hindi cinema opening its doors for him, he is expected to conquer the entire belt from the Ganga to the Gangotri.” 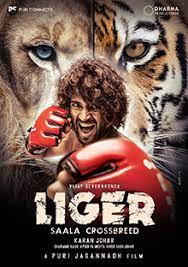 Vijay Deverakonda told Bollywood Hungama, “Liger is going to be a full-on big-screen experience. We’ve worked very hard on the action sequences. They’re like nothing audiences have seen before. I am confident Liger will bring audiences back into theatres.”

To perform in Liger, Devarakonda underwent a dramatic physical transformation for his role. He went to Thailand for martial arts training. Earlier, Janhvi Kapoor was selected for the female lead but then Ananya Panday was roped in. The film’s score is composed by Mani Sharma and even Tanishk Bagchi is also signed for Liger.

The film will be simultaneously released in Hindi and Telugu along with the dubbed versions in Tamil, Kannada and Malayalam languages. The makers of Liger initially planned to have a theatrical release in November 2020, but due to the COVID-19 pandemic, it got postponed. In February 2021, the film’s theatrical release was announced as September 9, 2021.