Urfi Javed Gets Trolled For Wearing A Risqué Outfit; Check It Out

Bigg Boss OTT fame Urfi Javed sports a risque outfit for her airport look, gets trolled by fans for the pastel bra peek.

Urfi Javed was first seen in the 2016 TV show Bade Bhaiyya Ki Dulhania, then in Meri Durga, Bepannaah, Puncch Beat Season 2 Ye Rishta kya Kehlata Hai, Kasautik Zindagi KiiKasautik Zindagi Kii respectively has a fanbase of her own. The actress was last seen in the famous reality controversial show Bigg Boss OTT which is one of the top watched lately and bid goodbye recently. For her recent look, the actress opted for a ripped denim look which gave a sneak peek of her pastel pink bra flaunting her abs and fresh make-up look. This clearly didn’t go well with her fans.

The trolls grabbed this opportunity and some comments such as, “LoL her top ran out of material”, “Not cool not elegant”, “She needs a stylist”, made it to the top and the shutterbugs comments section was filled with such words. During her time in the Bigg Boss house, Urfi entertained the viewers with her funny one-liners, her funny reactions to certain situations, creating drama and pulling the limelight and much more which in turn increased her fan following on a large scale giving her more lovers and haters too. She was the first contestant to be evicted and alot of fans were heartbroken to not see her in the house anymore. Her period may have been been short but her presence did add the extra drama element we all needed to spice up or cool down a situation. 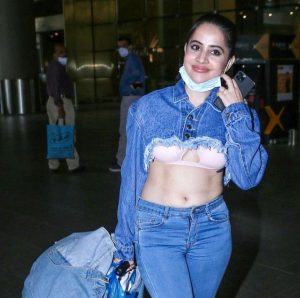 On being the first evicted contestant Urfi shared with News18, “I’m still crying. I can’t even describe how frustrated I am. I genuinely felt that I deserved to stay in the house. I was giving my one hundred percent in the show. I know for a fact that there are so many people in the house who do nothing except eating and talking nonsense”

What do you think about this risky outfit would you dare to wear or is it just not your style?