Tiger Shroff Shattered After Losing Kaizzad Capadia; Throwback To His Pics With The Man Who Helped Him Get His Fit Body

Tiger Shroff is a sensational actor, and his fit and toned body give one complexity. Everyone who knows about his fitness routine knows how close he was to his trainer, and his passing has left Tiger sad

Anyone who watches Tiger Shroff in action has seen his love for fitness. Tiger’s dedication towards having a toned body is commendable, and he credits his fitness to his trainers. He has instructors to help him with his diet, his workout regime, and learning other forms of exercise. One of his trainers, who made Tiger the man he is, Kaizzad Capadia, passed away on October 13, and the news has shattered Tiger for the worst.

Kaizzad Capadia was a renowned celebrity fitness trainer, and he has taken a lot of celebrities like Ananya Pandey, Kriti Sanon, Tiger Shroff, etc., under his wings. Kaizzad has made many celebrities reach their fitness goals. Kaizzad died on October 13, and the cause of his death is unknown. 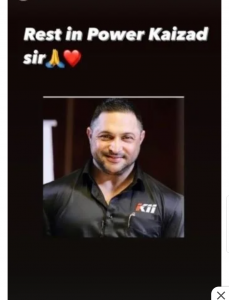 Tiger Shroff’s mother, Ayesha, was also shocked on hearing the news and went to Twitter to give her condolences to the fitness king. Ayesha added that Kaizzad has his whole life to bodybuilding, and even though she didn’t know him well, she knows how he helped her son to be fit.

49-year old Kaizzad Capadia, Fitness Expert (also Tiger Shroff’s trainer) had earlier taken 1st dose of Vaccine. On 13th Oct he passed away suddenly. His rapid antigen test was done after he was brought dead to hospital. Cause of death was listed as Covid. Imagine level of scam! pic.twitter.com/VyI0h4nigt

Tiger used to work out at Kaizzad’s gym in Juhu, and they have worked out a few times together. Kaizzad Capadia also has a fitness academy where he trains other celebrities and coaches many elite people. He has trained many trainers too, who went on to earn a name for themselves in the fitness industry.

Kaizzad’s passing away is indeed a loss for the fitness industry.