Tiger 3: Salman Khan’s rumoured girlfriend Iulia Vantur dashes off to Austria to be with the actor. Shares a video from the Love Lock Bridge, leaves fans excited

The Tiger franchise is all prepped up to roar once again and this time the entire crew and lead stars, Salman Khan and Katrina Kaif have worked day in and day out for the film to be a huge success. The team has been travelling for a month’s schedule to international locations like Russia, Istanbul, Turkey and now the cast and crew have landed in Austria for the last leg of their film’s schedule. Tiger 3 is helmed by Maneesh Sharma . The crew of Tiger 3 had left Turkey after they shot several scenes there and now moved to Austria. Apart from this Salman Khan’s rumoured girlfriend Iulia Vantur has also joined the cast and crew in Austria from where she shared a lovely video from The Love Lock Bridge. Her latest video has raised many eyebrows and made fans comment in abundance with love and admiration.

According to the reports from a leading daily, Austria will be the last location to shoot for the entire team of Tiger 3. The team will be shooting action sequences and songs in Austria. Previously, the actors were in Salzburg from where we will move to Vienna. They will also land in India’s Mumbai city to shoot a few scenes that will enhance the look and feel of the movie.

It is reported that the team of Tiger 3 will land in Mumbai on September 25th and complete the rest of the portions of the shoot. However, both the actors continued to share amazing pictures from their entire journey at international locations. Fans even shared their pictures with their beloved stars that hyped the entire film Tiger 3 to another level. Social media flooded with messages and posts about the movie. Recently, Katrina Kaif and Salman Khan bid adieu to Turkey and took to their Instagram handles as they had completed the shoot of their film in Turkey’s Cappadocia city. 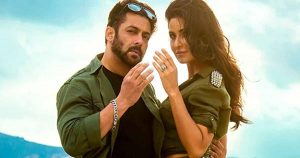 On the professional front, Katrina Kaif will be seen in Phone Bhoot which will be a horror comedy. The film is scheduled to be released later this year. The actress also has Jee Le Zaraa in which Katrina Kaif will be seen with Alia Bhatt and Priyanka Chopra. On the other hand, Salman Khan is speculated to have a cameo appearance in the Aamir Khan and Kareena Kapoor Khan starrer Laal Singh Chaddha. All the movies are highly anticipated by fans as the hype for these movies keeps the excitement high.