Hasdeyaan De Ghar Vasde host Ghuggi usually takes his guest’s case. But one of his guests gave him fitting replies. Read on to find out who!

The Zee Punjabi chat show Hasdeyaan De Ghar Vasde has become an instant hit. The reasons behind that are Gurpreet Ghuggi and Khusboo Grewal’s fantastic hosting skills and all the guest appearances. All the celeb guests have managed to leave an impression and added more value to the show. Gippy Grewal joined the chat show in one of the episodes. And he managed to bring the house down. We got you a recap of that hilarious episode.

Usually, Ghuggi is known for pulling the leg of the guests, but he never thought that there would come a time when one guest would actually turn the tables on him. So when Ghuggi welcomed Gippy and Neha, the host had no idea what was in store for him. Read on to find out. 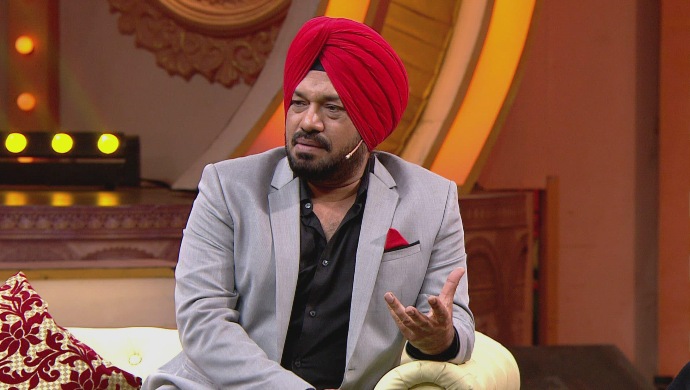 When Gippy Taunted Ghuggi About His Music Video

While sharing the stories of his struggle, Gippy mentioned his initial album Chak Le. Ghuggi said that the girl featured in it was really pretty. Bas fer ki… Gippy started shouting that Ghuggi watched his music video on mute mode. Gippy went on ranting and said this was very wrong. This was another laugh-riot moment.

When Gippy Asked Ghuggi Not To Dilute The Show’s Format

After Gippy and Ghuggi’s interesting banter, Ghuggi called Neha. Since Neha can’t speak in Punjabi, Ghuggi started talking to Neha in English. Gippy intervened and asked why he is spoiling the show’s format. Gippy asked Neha if she understood Punjabi, and Neha said ‘yes’. Then Gippy jumped at Ghuggi and said that if she understands Punjabi, then why is he speaking in English and showing off? Again Gippy knocked Ghuggi down a peg or two.

While speaking to Neha, Ghuggi asked if she has a ‘political’ background. Neha couldn’t get it at first as Ghuggi sounded a little weird. However, when Neha understood what Ghuggi was trying to say, Gippy again taunted Ghuggi by saying, “He was trying to impress you, but how will he get the accent right?” He continued, “Jagira ka saamna karne ke himmat toh juta paouge… kameenapan kaha se laoge”. Ghuggi went silent.

So these are some of the moments from Hasdeyaan De Ghar Vasde from Gippy Grewal’s episode that made us laugh out loud. Which is your favourite moment from the episode? Comment below with your views below.

Watch another laugh riot Vilyati Bhabhi only on ZEE5!