Aaradhya was born in 2011, four years after Abhishek Bachchan and Aishwarya Rai’s wedding. Soon after her birth, Amitabh and Abhishek stepped outside their home Jalsa and spoke to the media about the new member of the family.

Describing baby Aaradhya’s look right after she was born Amitabh Bachchan shared to the media that he thinks she looks like Aishwarya but babies’ faces keep changing as they grow up. But Amitabh still thinks she looks like Aishwarya. Some people at home think she looks like Jaya and Abhishek. Amitabh also spoke about his professional front and said that he is idle right now. Kaun Banega Crorepati has ended and he doesn’t have any film to shoot either. So he is idle and he will stay at home. Abhishek jumped into this and said Amitabh will take care of his grand daughter. The family didn’t decide the name of the baby that time. 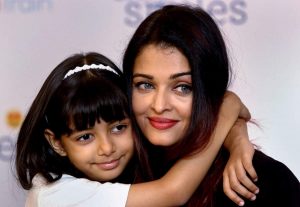 Amitabh Bachchan also pointed how Aishwarya totally refused to take any painkillers and said that they went there on the 14th night. The doctors had told the family that the baby could arrive anytime now. On the 16th morning, she delivered the baby. This was a normal delivery even though these days people opt for C-section and other things. But Aishwarya wanted a normal delivery, she had to struggle but he commended her that she was in acute labour for a long time, almost 2-3 hours. But she persisted, said she wanted a normal delivery. She did not use any epidural or painkiller.

The actor is currently hosting the 13th season of Kaun Banega Crorepati. Aishwarya has been working on her comeback movie Ponniyin Selvan with Mani Ratnam.