It was back in the year 2019 when Salman Khan had a crazy double celebration on his 54th birthday. The actor received a special gift from his sister Arpita Khan Sharma. Read to know more:

The preparation of Salman Khan‘s 54th birthday celebration was in full swing when Dabangg Khan received the best birthday gift of his life. Salman Khan’s sister Arpita and her husband Aayush Sharma welcomed their second baby on the superstar’s birthday in the year 2019. Undoubtedly, that day marked a double celebration for ‘Khandaan’ and especially Salman Khan, who now shares his birthday with his baby niece.

It was the day of Salman Khan’s 54th birthday when his younger sister Arpita Khan Sharma and her husband, actor Aayush Sharma welcomed their second child together. The couple, who were already parents to three-year-old son Ahil, were blessed with a baby girl. Sharing his happiness, Salman’s then special note for Ayat read, “Welcome to this beautiful world Ayat. Thank you Arpita and Ayush for the best birthday gift for the whole family. May everyone who reads this bless her and may she grow up and make everyone proud. Thank you for all your love and respect. You all have been very kind, thank you,”. 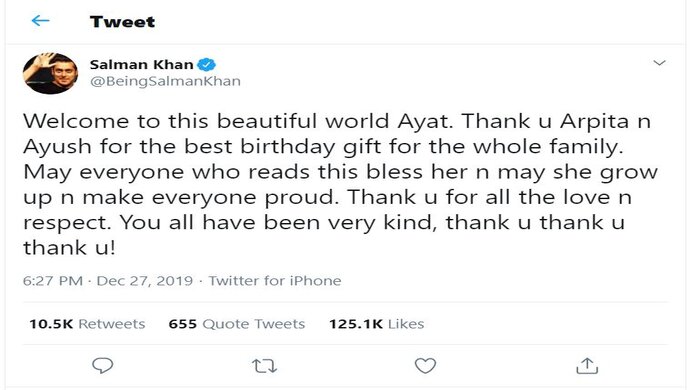 The celebration of Salman’s 54th birthday was hosted at Sohail Khan’s house instead of the annual celebration at actor’s Panvel farmhouse. Many Bollywood celebs like Sonakshi Sinha, Katrina Kaif, Elli Avram, Randeep Hooda, and many more marked their presence at the birthday party. The next day, Arpita was taken to Leelavati Hospital where she welcomed her newborn.

On the work front, Salman Khan’s last outing was in Ali Abbas Zafar’s Bharat. The actor will next star in Prabhu Deva’s directorial Radhe: You Most Wanted Bhai. The movie is the remake of the South Korean movie The Outlaws. The release date of the film has been postponed due to the COVID-19 scarce.

Stay tuned for latest updates on Salman Khan only on ZEE5.