The Wife: Why Gurmeet Choudhary’s New Poster Is Reminding Us Of Bipasha Basu-Karan Singh Grover’s Alone!

The latest poster of the horror flick The Wife features two Sayani Duttas and its similarity to the poster of Karan Singh Grover’s Alone is uncanny.

Gurmeet Choudhary and Sayani Dutta starrer The Wife is scheduled to premiere exclusively on ZEE5 on 19th March. The movie belongs to the horror genre and revolves around a young couple who moves to a new house and has a horrifying encounter with a spirit. ZEE5 recently released a new poster of the horror flick and we can’t get over the similarities it shares with the poster of Bipasha Basu- Karan Singh Grover’s horror venture, Alone.

In the latest poster, we see that Gurmeet and Sayani are sitting together in front of a large mirror, with Gurmeet facing the mirror while Sayani looks away. There appears to be another Sayani behind the couple who is holding onto Gurmeet and staring into the mirror. Gurmeet looks quite disturbed and the scenario is very disturbing indeed.

Also Read: Did You Know Gurmeet Choudhary And His Wife Debina Were Secretly Married, Way Before Their Public Wedding Ceremony?

The dual presence of Sayani in the poster reminds us of the poster of another horror film Alone, which featured Bipasha Basu and Qubool Hai 2.0 actor, Karan Singh Grover. Alone’s poster too featured two Bipashas who can be seen holding onto Karan. The sense of eerieness in The Wife’s poster is very identical to that of Alone.  While Alone revolved around the story of two conjoined twins, we are yet to see what relation the two Sayanis have in the plot of The Wife. 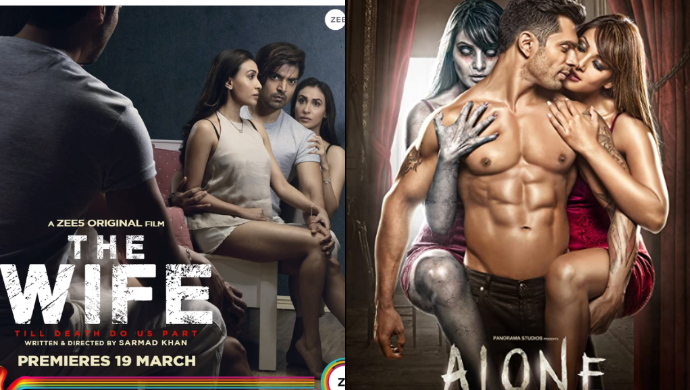 The first poster of the movie also emitted a strong ghostly presence with the lead couple sitting on a washing machine whose glass door is imprinted with a handprint. The latest poster of The Wife was released by ZEE5 and the caption read, “Ghosts of your past are closer than they appear!” Is this a hint to the secret of the two Sayanis in the movie?

To find out more watch The Wife on 19th March exclusively on ZEE5.