Best-loved for her comic timing and performance in the ace standup comedian Kapil Sharma’s hit comedy chat show The Kapil Sharma Show, TV actor Sumona Chakravarti has been diagnosed by being COVID-19 positive

As the deadly wave of COVID-19 pandemic which has been plaguing the world ever since March 2020 was not seen getting over even in the last year 2021, now it has come back with a huge force in the year 2022, many of our Bollywood and tinsel town celebs have been getting diagnosed with the COVID-19 deadly pandemic which has been growing by leaps and bounds in our city which has made the government also tighten up their socks to get ready for combatting this third wave of the deadly virus and now joining the likes of television stars Nakuul Mehta, his wife Jankee, and son Sufi, the latest actress to join the same ongoing list and bandwagon is none other than The Kapil Sharma Show fame Sumona Chakravarti who has also gained fame for her stellar performance as Natasha Kapoor in the TV czarina Ekta Kapoor’s hit and iconic show Bade Achhe Lagte Hai season 1.

The actress has also contracted the virus and informed her fans and followers of the same by sharing an Instagram story on her account in which she has mentioned how she has been currently been under quarantine at her home after being tested as positive for the COVID-19 virus and in her note, she wrote that she has tested positive for COVID-19 with moderate and mild symptoms and also got quarantined at home and also signed off by mentioning these words which mentioned that she is humbly requesting everyone who has come in contact with her within the last week to get themselves tested and also thanked everyone for their wishes as well. 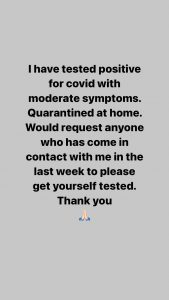 Sumona Chakravarti is best-loved for featuring in The Kapil Sharma Show and Comedy Nights With Kapil. She has also featured in shows like Bade Achhe Lagte Hain, Ek Thhi Naayka, Yeh Hai Aashiqui and has appeared in quite a few Bollywood films like Barfi, Kick and Phir Se as well.