Aditya Roy Kapur is all smiles as the re-make of the famous Tamil film Thadam goes on floors. The film also starrs Mrunal Thakur in pivotal role. The actor shared a picture with the clapperboard on his social media

Thadam re-make starring Aditya Roy Kapur has gone on floors today. The film is backed by Bhushan Kumar and Murad Khetani, the Hindi version will be directed by Vardhan Ketkar.

Aditya Roy Kapur took to his Instagram Stories and shared a picture of himself with Khetani and Ketkar as they hold a clapperboard from the film’s sets. 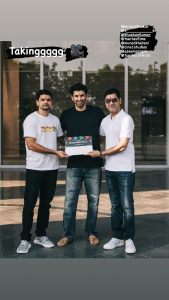 Aditya Roy Kapur will be seen doing a double role for the first time.

The original action thriller was released in 2019. The film was directed by Magizh Thirumeni. The film starred Arun Vijay in a double role alongside Tanya Hope, Smruthi Venkat and Vidya Pradeep.

In the remake, Aditya Roy Kapur is taking on the characters played by Vijay, while Mrunal Thakur will feature as a cop.

The plot of the film revolves around the murder of a young man. Confusion ensues when the key accused in the murder is found to have a look-alike.

Besides this film, Aditya Roy Kapur will be seen in Zee Studios big-scale action feature, tentatively titled “Om: The Battle Within”. He will reportedly also star in the Indian adaptation of John Le Carre’s spy drama “The Night Manager”.

Aditya Roy Kapur last featured in Malang with Disha Patani. The film was a massive hit and made the audience groove to the songs. The film showed how to live life to the fullest.

Before Aditya Roy Kapur, Sidharth Malhotra was signed to play the lead role in Thadam’s Hindi remake. On March 4, 2020, Sidharth shared a picture with producers Bhushan Kumar and Murad Khetani on Twitter

Double trouble!
Excited to be a part of this ultimate entertaining thriller, in association with @itsbhushankumar, @MuradKhetani and #VardhanKetkar.
See you at the movies on 20th November, 2020@Cine1Studios @TSeries pic.twitter.com/6KwOTjeFG7

This film looks a promising one and the fans are eagerly looking forward to hear the nest news. After Malang, Aditya Roy Kapur will be seen in a completely different skin which is really exciting.