Karthik Raj, popularly known as Adi from Sembaruthi, recently made his digital debut with Zee 5’s original series Mugilan. The series, starring Karthik Raj and Ramya Pandian in the lead, narrates the tale of an influential underworld kingpin, who fights for his life and family. Mugilan, written and directed by Sri Ram Ram, premiered on ZEE5 recently. As Mugilan is receiving rave reviews from all corners, here’s a look at Karthik Raj aka Mugilan’s evolution from a boy-next-door to the most wanted don.

Watch a trailer of the series below:

Karthik as the lover boy:

Karthik started his acting career with the TV show, Kana Kaanum Kaalangal Kalooriyin Kadhai (2011-2012), where he essayed the role of Karthikeyan. He played the part of a college student, which gained him a massive fan following among the small screen audiences. Kana Kaanum Kaalangal Kalooriyin Kadhai’s success was followed by Ram Vinayak’s Office (2013-2015). The serial, starring Karthik Raj and Shruthi Raj is a comedy series that proved the former’s versatility as an actor.

Karthik Raj as the boy-next-door:

After working in TV for a few years, Karthik Raj tried his hands at movies. Karthik’s first Kollywood film was Sai Sathyam’s 465 (2017). He then appeared in debutant Dinesh Selvaraj’s Naalu Peruku Nalladhuna Edhuvum Thappilla (2017). Karthik’s role in both the movie was of a boy-next-door, and resembling his big-screen characters was his hit show Sembaruthi. The serial, starring Shabana, Karthik, and Priya Raman in the lead is one of the highest-rated TV shows of all time.

Karthik Raj as a deadly criminal:

From boy-next-door to a deadly criminal, Karthik Raj’s evolution as an actor is commendable. He recently made his digital debut with Zee 5’s original Mugilan. The series directed by Sri Ram Ram traces the rise and fall of an underworld don named Mugilan. Mugilan has managed to impress the critics and audiences alike. 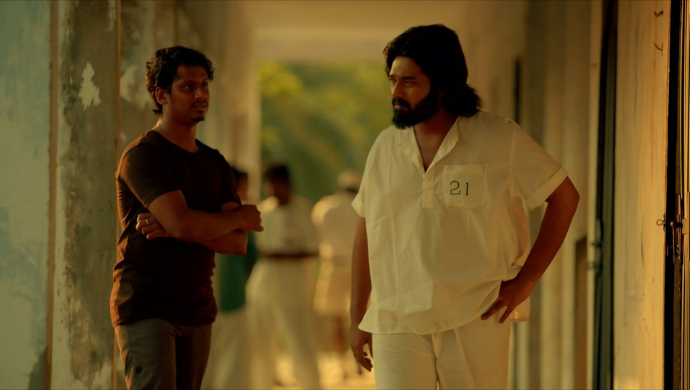 If you are a die-hard fan of Karthik Raj aka Adi of Sembaruthi, don’t miss Mugilan on ZEE5 Premium.

Mugilan premiered on ZEE5 on October 30 and has been receiving positive reviews from all quarters. Audiences are raving about Karthik Raj’s character and the riveting screenplay of the series. You can watch Mugilan after you subscribe to ZEE5 Premium.