Sunny Leone and beau Daniel Weber take their time offs in Maldives. Sunny Leone has shared her various looks at the beach and we’re rooting for them.

For the first pic, she’s seen wearing an all white dress which is also the perfect one shoulder dress with her hair open and with all smiles captioned it as, “Let’s just say it was a great night here…”

The second look is in the sea wearing a sky blue bikini and oh boy she’s flaunting her curves like a pro.

The third one is seeing wearing a cut-out swim suit and Leone is sunkissed while laying the sand’s bed with a blanket of the sea and captioned the picture as, “No filter needed here!!” Well, we totally agree to this. The picture is just perfect.

The fourth look being nothing less is a Blue monochrome bikini and the actress is posing standing in the swing asking her fans whoever would like to join in for a swing. The picture was captioned as, “Seat next to me is open!! Who wants to come for a swing!!”

The next one is an all peachy bikini look wearing an oversized hat with glasses soaking in all the Vitamin D her skin needs. This one truly stole our hearts. She captioned this picture as, “Hello Maldives” 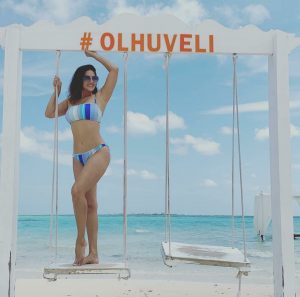 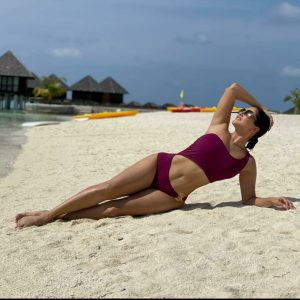 In this carousel pictures, the actress posing with a rescued Macaw. The post was captioned as, ”Animal rescue on the island!! He was adorable until he decided he wanted to take my glasses! Naughty Macaw!” Leone posed for a few pictures with the bird but in no time, it went for her sunglasses. The actress is seen wearing a blue collared dress with a headband for this outing and looks super fresh and happy. 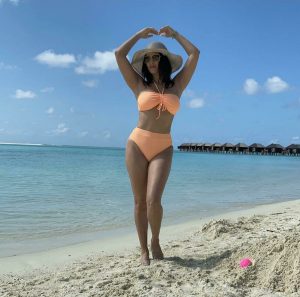 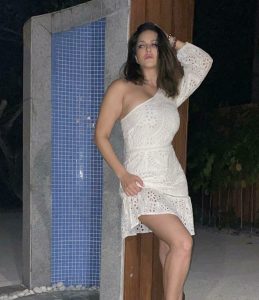 These Instagram images are truly a treat to the eyes giving us our workout motivation and driving away the weekday blues.

The actress recently wrapped up her shoot schedule for Shero, a multi lingual film and made an appearance on Bigg Boss OTT.