On the occasion of their wedding anniversary with wife Mana Shetty, Suniel Shetty has shared a priceless throwback photo. Athiya Shetty has a special wish for her parents

We are constantly saying that December is the wedding season as we witnessed many weddings this month. Rajkummar Rao-Patralekhaa, Katrina Kaif-Vicky Kaushal, and several other celebrities in the entertainment industry tied the knot in this wedding season. Indeed, the season was meant for the wedding as actor Suniel Shetty also got married on December 25, 30 years ago. Yes, the actor and his wife are celebrating their 30th wedding anniversary on the day.

Veteran actor Suniel Shetty took the wedding vows on this day 30 years back with his wife Mana Shetty. On their 30th wedding anniversary, the actor has shared a throwback priceless photo featuring the two from their young age. Sharing the photo on his Instagram account, Suniel Shetty wrote that they are beautiful then, beautiful now and they will be beautiful forever. Further, he added happy 30th-anniversary wifey.

As soon as the Dhadkan actor shared the throwback photo on his social media account, the congratulatory comments started to drop in. Archana Puran Singh in the comment section wrote, “Much love and happiness to both of you @suniel.shetty and Mana!” Actor Rahul Dev wrote, “Awesome ! Happy anniversary to you both”, along with a few adorable emoticons. 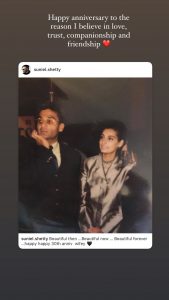 (Also Read: Suniel Shetty Believes That Son Ahan Shetty Is Far Better Than Him When It Comes To Acting)

While everyone else was dropping the comments in the drop-down section, the couple’s daughter and actress Athiya Shetty shared her father’s post to her Instagram story. While sharing it, the actress wrote that reads as a happy anniversary to the reason she believes in love, trust, companionship, and friendship.

We wish a happy anniversary to Suniel Shetty and his wife Mana Shetty.