Akshay Kumar, Ajay Devgn And Ranveer Singh are going to shoot independent promotional videos. The duo will share a screen-space over 30 minutes with Akshay Kumar. The film is all set to release on November 5

Sooryavanshi is a film which saw multiple delays and has finally decided to release big in the theatres on November 5 2021.

The latest update on the film is that the duo of Ajay Devgn And Ranveer Singh have over thirty minutes of screen space to be shared. The trio are shooting independent promotional videos which might be a teaser for the upcoming film.

Earlier it was reported that Rohit Shetty will be releasing songs like ‘Aila Re Aila’ and ‘Tip Tip Barsa Paani’ from Sooryavanshi that will create social media rage, now the filmmaker has planned something unique.

Reportedly, director Rohit Shetty will also be shooting multiple independent videos with Ajay Devgn, Akshay Kumar and Ranveer Singh. In fact, he wrapped up shooting the said videos just this week at PVR cinemas. It’s the first cop universe film and he wishes to position it as something that brings 3 superstars together for the first time. Also, Rohit might unveil a teaser too featuring all the 3 cops closer to the film’s release. 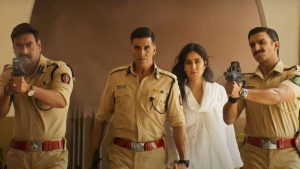 The time range of two big stars seems more than enough and with that we can expect some octane action sequences.

Sooryavanshi saw multiple delays when it came to choosing one final date for the release. Looks like they have locked in one date and are ought to stick to it. We’re very excited to see this cop drama on the big screen.

A Rohit Shetty film has the best fun only and only in Theatres no where else.

Speaking of theatres, the CMO Maharashtra Uddhav Thackeray announced that theatres will be running from October 22. We can’t wait for a high octane action-packed Rohit Shetty directorial to finally release on big screens how about you?