Soha Ali Khan And Sharmila Tagore Worked Together In THIS Film; Actress Opens Up About Her Experience – Deets Inside

Soha Ali Khan and mother Sharmila Tagore have worked together in this film. The duo have shared screen space and now Soha Ali Khan opened about her experience – Don’t miss

Soha Ali Khan Pataudi, the daughter of Indian veteran actress Sharmila Tagore and former Indian cricket captain Mansoor Ali Khan has worked in Hindi, Bengali, and English films. She is the younger sister of actor Saif Ali Khan. She started her acting career from the romantic- comedy movie Dil Mange More in 2004 and is best known for her role in the drama movie Rang De Basanti in 2006, for which she was nominated for the Filmfare Award for Best Supporting Actress.

The actress recently has opened up about her work experience with her mother, Sharmila Tagore and she called it terrifying. In a recent interview, Soha said that her mother Sharmila Tagore’s standards are very high and also revealed her advice given to Soha on the set of Rang De Basanti. Sharmila Tagore and Soha Ali Khan have worked together in a film, Life Goes On in 2009. The film won an award at the London Asian Film Festival and at the Pravasi International Film Festival in Delhi. 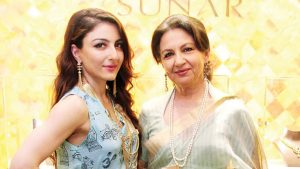 Recalling her work experience with her mother Sharmila Tagore, Soha further added that, ‘even to do one small advertisement with her, she feels very scared. Everything from costumes to designing matching shoes, she does it all in two weeks in advance. And when it comes to herself, her clothes inevitably have some dal sain or something and she is least bothered.”

Talking about her mother’s advice, Soha said, She remembers during Rang De Basanti she had asked her how would she attempt the character if she played it well? And her mother responded ‘You have to listen to only one person- the director, Rakesh Omprakash Mehra. You must follow his lead.’ That is also useful because if you keep taking several inputs, you can get confused.”

Rang De Basanti was released in 2006 and the film won the National Film Award for Best Popular Film and was nominated for Best Foreign Language Film at the 2007 BAFTA Awards.

(Also Read: Soha Ali Khan And Kunal Kemmu And Inaaya Mark Mansoor Ali Khan’s Birthday With THIS Remarkable Gesture; It Will Spread A Smile On Your Face)